Start a Wiki
Grounder is a character from the Sonic series. He was purpose created for the Adventures of Sonic the Hedgehog television series, immediately after Scratch.

Grounder was one of the playable characters in the early Lunatic Entertainment game, Sonic Bomberman, released in 2001. He possessed average speed but could take two hits before dying.

Grounder makes an appearance in Sonic Heroes 2 as part of Team Badnik.

Grounder makes a reappearance in Lunatic Entertainment's Sonic Reunion, which features a majority of the Sonic characters across various media platforms in a gritty setting. Grounder is a member of Team Dark alongside Rouge the Bat, Shadow the Hedgehog, E-102 Gamma, Omega, Scratch, Coconuts, and his master, Dr. Eggman.

Grounder is one of the thousands of characters to appear in this 2D action battle royale. In the game his character is of the dual Saboteur/Die Hard class, with the former being a reference to his original appearance in Sonic Bomberman, and his latter due to his being an American slapstick cartoon character.

Although not particularly fast-moving, Grounder is able to damage any opponents that he comes into direct contact with from the front due to his drill arms and legs. He can become an Ally of Convenience with Dr. Eggman, who can repair him if damaged or destroyed. He also possesses an alternate costume that gives him the appearance of a regular Grounder enemy from Sonic the Hedgehog 2.

He is partnered up with Plankton to form the World 7 boss. Plankton fights in a robot suit whilst Grounder attacks with a laser sword while running around the 3D background. The player can spin attack to launch Grounder into Plankton's suit.

He appears as one of Dr Eggman's minions since the episode Immortal and is partnered alongside Plankton. 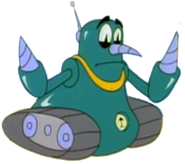 Artwork from Super Mario: Dimension Journey (TV Show) using his beam sword.
Add a photo to this gallery
Retrieved from "https://fantendo.fandom.com/wiki/Grounder?oldid=2684574"
Community content is available under CC-BY-SA unless otherwise noted.