Start a Wiki
“Androids! Destroy him!”
— Grimick sending his androids to destroy Xeno


Grimick, or Lord Grimick as he calls himself, is a beorn from an alternate universe who first appeared in Another. Also, he is one of the main antagonists in the Alternate series. He is the leader of an evil organization called The Freakish.

Grimick is a Beorn who's fur tone is greyish black and red. He wears a grey robe with a big GK on the back of it. His eyeballs look somewhat robotic, and his eyes are red. Also, the tips on his hands and feet are red, and he has long, large claws on his hands. He also has a red lower abdomen.

Grimick appears in Another as a major antagonist. Everything else is undecided. 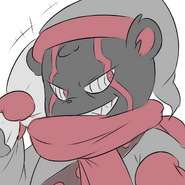 Add a photo to this gallery
Retrieved from "https://fantendo.fandom.com/wiki/Grimick?oldid=2264503"
Community content is available under CC-BY-SA unless otherwise noted.