Grimer (Japanese: ベトベター Betbeter) is a Poison-type Pokémon. It evolves into Muk starting at level 38.

It has a rather green Alolan form that is Poison/Dark-typed.

Grimer is a slimy, amorphous blob-like Pokémon, made of living purple sludge. Its body is a pungent cesspool of bacteria, which are so potent that it renders soil barren and incapable of supporting plant life ever again. It has two large eyes with beady little pupils, and a gaping mouth with a grey tongue. While it lacks any visible legs, it does have two arms with three digits on each hand. It is constantly oozing; endlessly leaking a germ-infected fluid from all parts of its body. Pieces of it often breaks off during travel, and from these pieces new Grimer will begin to grow. When combined with another Grimer, it produces new poisonous compounds.

Due to its lack of a solid form, it is capable of squeezing into any space or crevices with relative ease. It uses this to penetrate sewage pipes so that it may feed off of the filthy waste water inside. It happily consumes and thrives off nearly any form of waste or refuse. It can be found in polluted lakes and streams, as well as within cities and factories where trash and industrial waste can be found.

It appears to be a pile of living sludge. Grimer may also be based on the imagined fear that heavy pollution, caused by the leakage and/or improper disposal of toxic/radioactive waste, may result in the creation of new and undesirable life.

Grimer is derived from grime (dirt or filth). 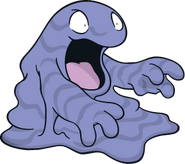 Generation VI
Add a photo to this gallery
Retrieved from "https://fantendo.fandom.com/wiki/Grimer?oldid=2911372"
Community content is available under CC-BY-SA unless otherwise noted.