Greyscale Humans are the main enemy in the game ColorLoad. They attack Koloro on her quest, and she must restore them to make them passive again. They come in many diffrent type, as listed below.

In this game, they are the main enemy, and Koloro needs to restore them with color.

In this game, it is a playable character, along with Koloro.

He appears in this game as an unlockable character.

Just an average joe, who simply attacks by punching and kicking. He runs at an average speed and can't jump very high. They do not take much color to restore, and are the most common of enemies.

This enemy hides under an umbrella to protect itself from the rain. To attack it hits Koloro with it's umbrella, and it shields itself with it as well. Moves slowly, and can jump a little higher than Civillian. Found in the world Rainstorm Rivers.

Basically the Civillian, but has a fast runspeed and jump height.

A short, somewhat passive enemy holding a balloon. But, to restore the rest of him, you must pop the balloon, which will make him attack you quickly.

This Greyscale Human is very slow, but very powerful and takes a whole load of paint to restore. Should be featured around the second world maybe?

This Greyscale Human is very ghostly, as it sometimes dissapears to the point where it's part visible. You can only hit it when it's not invisible at all.

This Greyscale Human has a lasso that can attack you from far range. You can color the lasso to make it dissapear.

These Greyscale Humen can be restored very easily, but are fast and are usually found in large, deadly, numbers.

This Greyscale Human loves to get all up in your face, as it has a sword for melee damage. But knights can also throw Greyscale Spears from afar.

These Greyscale SPIDERS are weak and fast, but you need to duck and attack in order to hit them.

This Greyscale Human can dig underground, and then pop out right under you. You need quick reflexes to avoid them.

This Greyscale Human does not move. But it has a 360 Degrees shield, and only puts it down to attack. 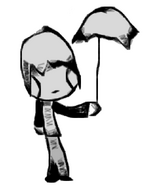 Umbrella
Add a photo to this gallery
Retrieved from "https://fantendo.fandom.com/wiki/Greyscale_Humans?oldid=2424329"
Community content is available under CC-BY-SA unless otherwise noted.