Greninja is a playable veteran character in Super Smash Bros. Calamity. Greninja is a dual-type Water/Dark Pokémon and is the final form of Froakie who evolves after Frogadier. Greninja is a bipedal frog-like Pokémon with a pink tongue which acts like a scarf, who runs at the speed and grace of a ninja and uses multiple shurikens made of water to attack its opponents.

Due to the inclusion of more taunts and victory poses, Greninja has many more animations for it.

Similar to Lucario, the first few frames of Greninja's spotdodge is now Substitute, which functions similarly to how it did in SSB3DS/WU.

New up smash, a rising slash with a water katana. It has more range and is stronger in terms of knockback, and also has slightly less ending lag.

New down tilt, Mat Block, a Fighting-type move in the Pokémon games, and, prior to Generation VII, Mat Block was the signature move of Greninja. It sends opponents upwards and has low ending lag, making it a good combo starter.

New back aerial, a water katana slash behind it similar to its forward aerial, which deals more damage and is stronger.

Hydro Pump is now a simple water blast beneath Greninja (similar to its Single-Shot Pump custom up special from SSBWU/3DS), which covers less distance and has way less options than before.

Hydro Pump can spike opponents beneath Greninja, making it a decent edgeguarding move.

Smokescreen is no longer a counter move. 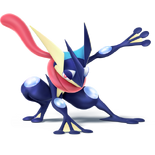 
Greninja has an alternate costume based on Ash Greninja, a type of evolution for it via Bond Phenomenon shown in the Pokémon XY anime series, also giving it three more alternates.

Retrieved from "https://fantendo.fandom.com/wiki/Greninja_(Calamity)?oldid=2610074"
Community content is available under CC-BY-SA unless otherwise noted.