Fantendo - Game Ideas & More
Register
Don't have an account?
Sign In
Advertisement
in: Free to use Characters, OwtheEdgehog, Characters,
and 8 more

View source
“Name's Gregory Glasgow, but just call me Gregor or Glasgow. Local merchant, selling some of my old stuff for dirt cheap prices, and other stuff at a price that would be a cheapskate's and a poor man's true nightmare. Who knows, there might be something that you might want...something that might be useful...or something that you want to spend your pocket change on...?”
— Gregor introducing himself.

Gregor the Gengar (real name being Gregory "Gregor" Glasgow, normally just called Gregor, Glasgow or Cheshire by some of his friends) is, hence his name, a Gengar who resides in the Zaxinian Lifts on the planet Florice. Gifted with the ability to hide in the shadows, pretend to be someone else's shadow, levitate and other abilities normally seen by Ghost-type Pokémon, he is known for lurking in mansions when he was just a Gastly, pulling pranks by creating fake fire inside those mansions, and as he evolved into what he is now, he did even more pranking. He eventually dropped this (albeit still turning into other people's shadows) later on in his life, and now sells some of his old stuff for dirt-cheap prices, but also some other stuff at a price that would be a "cheapskate's and a poor man's true nightmare", as he puts it. He runs his shop alongside his crazed and insane assistant Tricky the Sableye. He canonically first appears in Crimson the Roserade as a supporting non-playable character.

Since he does not involve himself into many conflicts on his home planet or in the Lifts all together unless he is dragged into the mess, during the events of second phase of the Lifts, he does not join either side of the Resistance, and still runs his shop alongside with his assistant Tricky Ricky, though he probably will aid them from time to time, as he just wants to sell his stuff.

Gregor, along with other Pokémon characters in the Lifts, were confirmed to not return into the reworked Zaxinian Lifts by Athena, meaning Gregor is "free to roam the stars" according to his creator.[1]

Just by looking at/hearing his name you can tell that Gregor is a Gengar; a shadow-like, round-bodied, three-fingered, red-eyed and three-toed Pokémon with two large, pointed ears, a short tail and short spikes lining his back, three of them acting like his "hair". Gregor wears a dark-grey hoodie with an upside-down imprint of the Fog Badge on it, though he originally had hoodie with a Gengar's footprint. One of his teeth is golden, which is a fake tooth, the real one being chipped out long ago (and he hates talking about it).

When he Mega Evolves into Mega Gregor, a portion of his body sinks into the ground, with the lower portions turning more reddish purple, with a third, oval, unblinking yellow eye appearing on his forehead that allows him to see into other dimensions (which he is unaware of). The spikes on Mega Gregor's back are more numerous and pointed. Additionally, spikes appear on his hands and tail, and his ears are now considerably longer and project backward. His hoodie rips into pieces in this form, though it oddly and magically reforms back when he turns back to normal.

When he was just a Gastly up until he evolved into a Gengar, Gregor is a mischievous Pokémon who enjoys pulling pranks on people (even on some of his friends), creating fake fires, and when he evolves into a Gengar, pretending to be their shadow and scaring them. With close friends (like a gang of Ghost-type Pokémon he was apart of at one point), he normally refrains from pulling pranks on them, and is usually non-hostile and friendly around them. Nowadays, he just wants to sell anything he comes across for some money, either Pokéblocks or USA CASH MONEY.

In general, Gregor is mostly a laidback and easy-going character, rarely getting angry at certain stuff (though it is possible for him to get irritated and annoyed), and not really jumping into any conflicts unless he is dragged into the mess. He is also kind of stoic. When Gregor does get angry at someone, Gregor will go out to the extreme lengths to harass and even severely harm them if he gets the chance. He also tries to shut down any, if not all, possible theories concerning him or his species, and has a distaste for sour-flavored objects and soup. In battle, Gregor often tries taunting his opponents to bait them in, making use of his powers and toxic spikes. He mostly keeps it cool during battles as well unless provoked or feels like he should take matters seriously.

Gregor also has an affinity for other Ghost and Fairy-type Pokémon (mostly female Pokémon), and often tries flirting with them, which will end in him falling flat on his face when they do not return those feelings. He also has a knack for trick or treating (unless he gets sour candy).

Being a Ghost/Poison-type Pokémon, Gregor can perform moves like Shadow Ball, Confuse Ray, and others (though he cannot use any Poison-type moves, which he thinks that is lame). He can even perform Psychic-type moves like Hypnosis. He also has toxic-barbed spikes can use to poison and slow down anyone chasing him. He also has the power to levitate, and hide in the shadows (or through a dark wormhole, which he can sink into and store items in there, or just drop stuff down there to a lower floor) to evade attacks or to surprise attack someone from behind or below them. Gregor also has is the ability to create fake purple fires on the ground, on candles and chandeliers, etc. He mainly uses this for decorations nowadays.

A certain ability he loves to use is to pretend to be someone else's shadow when hiding in the shadows, but it is not really very effective if the shadow is bigger or smaller than his own body. Also, his Ghost-type attacks are useless against Dark-type and Normal-type Pokémon, especially since they do not do anything to Normal-types. He is also terrible at using weapons that are not really his size, and has a rough time using them, let alone standing up straight while holding them. He also suffers from recoil when using shooting weapons; each time he fires off a shot, he is pushed back either slightly or far away depending on how strong it was.

Like some other Pokémon, Gregor can also Mega Evolve using a Gengarite, which makes him shorter, but he is significantly more stronger in this form, and almost all, if not, all of his abilities are drastically increased, making him more dangerous. He can also see into other dimensions (or universes) through his third eye, but he and others are unaware of this.

Gregor appears a supporting character as the game's item-based shopkeeper, working alongside Tricky Ricky in his shop. He sells different potions, berries, and the like during the weekdays for Pokéblocks, preferring Sweet and Dry ones and heavily disliking Sour ones. During the weekends, he will reluctantly accept Sour Pokéblocks for weapon and armor upgrades as his partner spends the time fixing up the shadow shop and collecting new items for him. In battle, he is relatively calm and hard to piss off, though if the player does manage to do so, it will not be or end pretty for them.

Gregor appears as a non-playable character in Fantendo Smash Bros. Nil, being able to be summoned to assist the player via Summoner Orb. When first summoned, Gregor appears as a shadow mimicking another character's shadow, before jumping out. He then starts throwing toxic spikes and uses the moves Shadow Ball, Shadow Punch, Hypnosis and Dream Eater to attack. After a while, he will despawn.

Sometimes, Gregor will replace a normal Gengar when summoned from a Pokéball in Super Smash Bros. GR, though he retains the same function of a summoned Gengar.

Gregor appears as an unlockable clone character in Zonal Fever.

Back when he was just a Gastly, Gregor met Dess when she was a Misdreavus inside a random mansion he came across. The two quickly became a nearly unbreakable tag team, pulling pranks on anyone who enters any mansion they just so happen to be inside of. Over time, Gregor developed a small crush on Dess, though never got around to confessing his love to her before she mysteriously left him. Nowadays, he keeps on thinking about her, and is the only part of his past he never wanted to forget; he wishes he could be able to see her again.

“[...] And this is my pal Tricky, I just call him "Ricky" or just "Rick". I like the latter nickname better...anyways, he sells upgrades for your weapon and armor that you might find...underwhelming and pathetic at this point. Just sell him... [shivers] sour Pokéblocks and he'll buff those weapon and armor of yours. Also, he's a bit feral and crazy, and will attack anyone people standing idly by near the shop, so... don't do that.”
— Gregor, introducing Tricky to the chosen playable character in Crimson the Roserade.

Tricky (called Ricky or just "Rick" ...or "Rick Gastley" by Gregor) is a Sableye who is one of Gregor's recent friends during the events of Crimson the Roserade, working alongside him in his shop. He is aware of his Sableye partner's crazed and somewhat violent nature, and tries to restraint him whenever he goes out of whack. Other than that, they are on good terms and have a somewhat strong friendship. 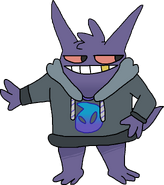 Gregor doodle by KeebyZ, a great artist and friend of [Ow]. 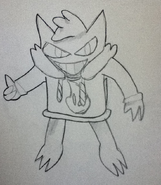 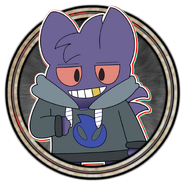 Gregor and Ricky on December 25, Christmas.