They appear to be normal Power Stars in appearance although somewhat rounded. They have black eyes. They are an emerald green color. They radiate a green glow and spin seemingly on their own.

Green Stars appear as a prominent collectable alongside Star Coins. They are used to unlock Lost Levels of each land and the hub world in the game.

Green Stars are a new item that is only usable in Star Ball Scuffle. The Green Star will gradually decrease your % when used, and it is held over your head. However, it doesn't last very long and slightly slows you while using it.

Green Stars are hidden items that are scattered all over the map. There are 300 in total. 30 are only accessible in the past, 20 can only be found in the present, and 45 appear only in the future. The remaining 205 can be grabbed in any time period. 200 are needed to unlock the path to the final boss, and all 300 are needed to 100% the game. They are uncommonly given as prizes for completing Warp Pipe minigames. 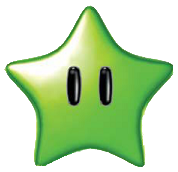 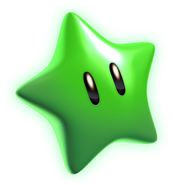 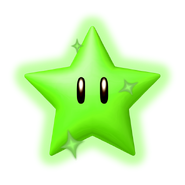 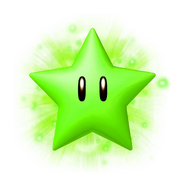 Retrieved from "https://fantendo.fandom.com/wiki/Green_Star?oldid=2399671"
Community content is available under CC-BY-SA unless otherwise noted.