Graviteen is the main character of the video game Powerborn and it's sequel, Graviteen: Silver Age.

Calvin Pond is the son of old superhero Captain Turbo, who retired after having him. As the years went by, it became clear that Graviteen was a Powerborn, a person born with powers. As he learnt to control these powers, young Calvin strived to become a superhero like his father once was. It was to the point that he took up a sewing class just to create his own hero outfit.

Turbo was hesitant at first, but eventually decides to allow him to fight crime. In order to keep an eye on the kid, Turbo comes out of retirement and makes Calvin his sidekick, to keep an eye on him. The two quickly became New York's biggest heroes.

Graviteen would, much later, figure out he isn't the biological son of Turbo. Instead, his real father was Turbo's old arch-nemesis, a mobster named Victor, who wanted to raise him as a super weapon. He was rescued and adopted by Turbo while Victor was sentenced to life in prison. While at first mad at his father for keeping this from him, he eventually forgives him.

Graviteen is a textbook example of optimistic, always wanting to look on the bright sides of things and always insisting everything will get better. He can't stand his friends being sad or upset and does everything he can to make them feel better, even to the point of it getting annoying sometimes. He too has his own self doubts, sometimes wondering if he holds people back or if he is just a plain screw up. It gets to the point where sometimes very minor things will get him upset for days. He always bounces back thanks to his father and friends, however.

He also enjoys company and dislikes working alone. Often he likes to hang out with others or go out on patrol with a partner. This is because of a mixture of not really fully trusting himself alone to get the job done and also just generally liking company. He particulary likes working with his best friend Cheerleader, and knows her almost as well as he knows his own father. Still, his favorite partner will always be Captain Turbo.

Graviteen is a Powerborn, a human born with powers who are born once every year. His power in particular is control over gravity. While at first he simply used it to lift objects, he over time gets more creative with it. Here is a list of things he can do with his powers:

Graviteen absolutley admired his father, citing him as the coolest hero ever and considers himself insanely lucky to be his son. He would do anything for him and never leaves his side unless he absolutley has to.

Cheerleader and Graviteen have been best friends ever since they first met, with Cheerleader considering him as her partner, a thought Graviteen shares with her. The two work very well together and are capable of acting in sync perfectly. Eventually the two start dating after Graviteen accidently asks her out. 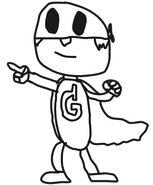 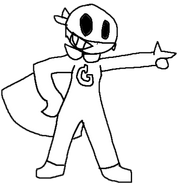 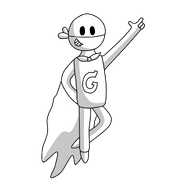 His art in Fantendo's Card Cataclysm (By Puddle) 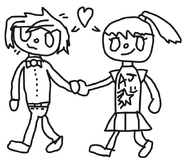 Art of him and Cheerleader for Fantendo Prom #1 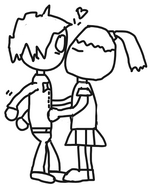 Art of him and Cheerleader for Fantendo Prom #2 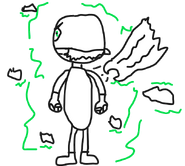 Ey Lois remember when I was Graviteen? (By Crakabo)
Community content is available under CC-BY-SA unless otherwise noted.
Advertisement