Gorge is a playable character in the Doom Dome Battle series, appearing playable in the first two installments. Despite being absent from the spin-offs, he reappears as a boss character in Warriors of Babylon. He is a high-ranking member of the Vindicts. Some of his DNA resides in Taïsha.

As can be seen from his body structure, Gorge is a heavy character. He doesn't move, accelerate or dodge very quickly, but to balance this he delivers strong attacks and has a rather high defense. This defense is party thanks to his special ability as a Vindict. He has a giant mouth on his stomach with which he can chomp anyone he wants. Inside of this mouth is a smaller mouth that acts like a grappling hook of sorts. Coming close to him from the front can result in receiving some heavy damage by his mouth. His insides are so big that there's basically a pocket dimension inside of his body, in which he stores much of his stuff. He usually fights using his own strength, but isn't shy to bring some of his operating tools to the fight, including the infamous anal probe for his Doom Attack.

His Doom Attack is Beam Me Up. When executed he messages one of the ships to beam himself and the opponent up. It brings them into his operating room where he throws the opponent on a table and violently shoves an anal probe into them, inserting an explosive chip along as well. He then shoots the opponent to the ground with an escape pod, and beams himself down. He presses a button which sets off an explosion inside of them, making them drop down to the ground and smoke releasing from their holes. If KO'd the explosion will simply implode the body and scatter the limbs around the screen.

In his youth Gorge always was bullied for being such a fat person, he could easily ignore this though and said it probably had to do with his ability, which had not manifested at that time. Gorge indulged himself into science instead. When his ability manifested in the form of a mouth on his stomach he was quickly approached to join the mothership, seeing much potential in him. He accepted but once aboard he killed the person in charge of the operating room and claimed his place. When he explored his first alien world he was fascinated with the other kind of species. Soon he started to abduct one species from each planet for him to investigate, experiment, dissect and all kind of things, which quickly turned into an obsessive hobby. Despite his own agendas, his superiors seem to overlook it.

Somewhere at the start of the assault Gorge beamed himself to the docks of Wildefort where he abducted Taïsha to be his test subject and resident for his zoo. He however was fascinated by all the various species roaming this planet and desired more of them. He headed to the Wildefort Zoo where he managed to abduct Lil'Pengu and brought him back to the ship as well.

While busy with his subjects Violet Snow enters the lab and spots Gorge and demands him to release Pengu. Gorge refuses, instead he desires Violet to become a subject for his collection as well. They engage in a battle, with Violet eventually freezing the entire lab including Gorge. She however gets pinned down by others and placed in a pod for Gorge to experiment on. He saw the mutant DNA of Violet and tried to mix it with that of Lil'Pengu. When Justin Bailey and Fat French Penguin enter, he fights Justin while he frees the mutated Pengu to fight FFP. While FFP manages to turn Pengu back to normal, the fight between Gorge and Justin ends in a tie when the ship crashes to the ground. He teamed up with Vexok and Kitty to fight FFP, Justin and Violet. The latter managed to flee only to get stopped by Zorks who wanted to kill Almighty and claim control over the Vindicts. He was beaten and Gorge threw him in a cooler pod for further experimenting. After defeating Soluna, he joins the crew in returning back to their home planet.

Before the second assault on Wildefort, he experimented on Taïsha, the only subject he managed to bring along with him from Earth. He used his own DNA and infused it into Taïsha, turning her into a hybrid species of a human and extraterrestrial. Gorge trained her to control her strange new ability of psychokinesis. When they assaulted Wildefort, Taïsha escaped to look for her father, but Gorge wanted to bring her back thus chased after her. He encountered The Shadow who was more than willing to cooperate with Gorge in retrieving Taïsha, if he would create a vessel for Shadow Man to reside in, Gorge agreed. His eye however was caught afterwards by the witches in Wildefort and went after Mai. After a confrontation he remarked that another entity was already dwelling inside of her, something truly evil with what he wanted nothing to do with. He disregarded the witches and went back to his lab. Shadow came in with Taïsha, pleasing Gorge. He upheld his promise and threw Shadow in the body of Zorks. After doing so an internal struggle happened between the two resulting in Zorks eventually taking the upper hand and eliminating Shadow. Gorge got attacked by Zorks, but was backed up by Anton & Millie who initially came chasing after Taïsha. After defeating Zorks, Gorge fought Anton & Millie, not wanting to give Taïsha back. He almost killed Anton & Millie, but Taïsha regained consciousness and threw Gorge into one of his own cooler pods. He was later freed by Almighty Kitty, who then prohibited him from continuing his experiments.

While he is not playable, a mental manifestation of Gorge appears as a boss in the game. He was placed there as an obstacle for Taïsha to overcome, confront the person who abused her.

As he appears in Warriors of Babylon 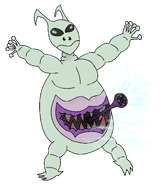 Profile
Add a photo to this gallery
Retrieved from "https://fantendo.fandom.com/wiki/Gorge_(DDB)?oldid=2593519"
Community content is available under CC-BY-SA unless otherwise noted.