Goomboss, also called King Goomba, the Goomba King, or the Chestnut King, is a recurring boss in the Super Mario series. He is a giant Goomba with a mustache and crown and was the first boss in Paper Mario but more recently appeared as a boss in Mario Kart DS on Baby Park.

Goomboss reappears as a boss in Super Mario MHL.

Goomboss reappears in Super Armando as Mayor Goomboss, in Goomba City. He is the first boss.

Goomboss is the bad guy in Mario & Bowser.

Hit By A Girl

Goomboss is the main villian in Super Princess Peach: Mushroom Kingdom's Drought, however; he is called

"King Goomba" rather than "Goomboss." He works for Bowser and steals Mushroom Kingdom's water supply.

Goomboss appears in RedYoshi's Universal Conquest as the first boss to be battled in the game. He is battled two times. The player defeats him just like he or she would battle a regular Goomba. The first time he is defeated, the player earns a Grand Star. The second time the player earns a regular Power Star.﻿

The Tables Have Turned

After complete and utter destruction, Goomboss is reborn in Goomsday Wii. A regular Goomba is knocked into a magical cauldron and is turned into the leader of his people. After knocking Bowser off the throne, Goomboss gets his hands on the Scepter of Superiority. Intending to make his army of thousands into an army of trillions, Goomboss discovered that he needed a Mega Mustache in order to wield the Scepter's full potential. He was thus forced to wait while the Magikoopas performed their magic on his facial hair.

“Bwa ha ha! Do you remember me? I'm no ordinary Goomba... I am Goomboss!”
— Goomboss, Super Mario Bros. Ultra

Goomboss is the Fortress Boss of World 1 in Super Mario Bros. Ultra. He works for Larry Koopa. You defeat him by first killing all the Goomba's he throws to you, then the Grand Goomba's, then the Mega Goomba's and then Goomboss himself.

Goomboss appears in a mission in Mission Mode. To complete the mission, you must throw the basketball at Goomboss. This takes 10 hits to knock him out (5 with the Golden Ball). When you throw the ball, Goomboss will try to bite the ball then shoot it off his sharp teeth. You have to dodge the ball, but it's shot at blazing speed. You have 2 minutes to complete the mission and you have 3 lives. This mission is easiest completed with the Golden Ball.

Goomboss is fought in Goomba Fields as the second boss in the game. He boasts low HP even for the point of the game he's fought at. Goomboss only has 36 health.

Super Mario Galaxy: The Legend of the Ultra Stars

“Ha! I am no ordinary Goomba, I am Goomboss, the great poo-bah ------  well you get the point!”
— Goomboss, Super Mario Galaxy: The Legend of the Ultra Stars

Goomboss reappears as the boss in the Jumbo Giant Galaxy. His battle takes place in a large room with giant blocks. In the fight you must grab the Spring Mushroom, powerbounce up to him, and ground-pound him. After one hit the block he stands on rises, and yellow elevating platforms appear. You must get on one and repeat the process. Then the block will get higher and more moving platforms appear. Hit him once more and you get the Ultra Star.

Behind the Boss Door in Mushroom Kingdom Way is a Goomba that Bowser transforms into Goomboss. The boss fight is similar to the fight done in Super Mario 64 DS, but with an added twist: the boss is protected by a shield and can only be harmed when the shield is destroyed. Destroying the shield is simple; a bomb must be thrown at the shield. Afterwards, Goomboss is vulnerable. After each hit, the shield is regenerated, but in a different color. Blue is the weakest, yellow is in between and red is the strongest. Once Goomboss is defeated, he pops into dust, opening the path to Toad Town.

Goomboss makes a minor appearance in this game as the first mini-boss in the game. He has a total of 25 HP in the battle, 7 ATK, and 3 DF. Luigi's Tell Ability says this: "Goomboss is the leader of Goombas. He doesn't follow Bowser's orders and wishes to dethrone him. But, being the fact that he is really only a giant goomba, he really is pathetic." 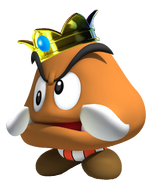 Goomboss, as he appears in Super Mario Bros. Ultra 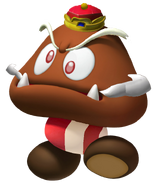 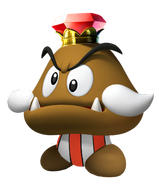 Goomboss, as he appears in Mario Party Wii U. By DohIMissed 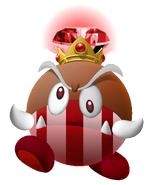 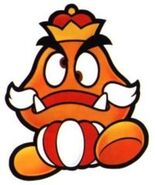 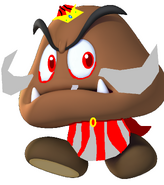 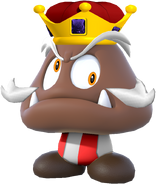 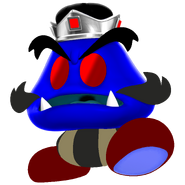