“Omigosh! Is... Isn't that a treasure map?! You HAVE to tell me where you got that!”
— Goombella, in Paper Mario: The Thousand-Year Door

Goombella is a female Goomba that appears in Paper Mario: The Thousand-Year Door. Her abilities are similar to Kooper in Paper Mario. She is a second-year co-ed student studying archaeology at the University of Goom, and as such is very smart. She's also really sassy and snarky, often cracking jokes about the current situation. She comes to Rogueport to find Professor Frankly to help her stud the treasure said to be beneath the town, and after finding Mario who has the Magic Map, she joins him on the adventure. Her abilities are similar to Goombario in Paper Mario and Tippi and Tiptron in Super Paper Mario.

Goombella first appears in Paper Mario: The Thousand-Year Door. Just when Mario arrives to Rogueport, she is seen being interrogated by Lord Crump and some X-Nauts, trying to get information about the Crystal Stars. Mario manages to defeat them and escape with Goombella, who thanks him with a kiss. She explains that she came here to study the treasure said to be hidden beneath Rogueport, and Mario says he has a treasure map. Eager to find out more, she joins Mario's party to find her teacher, Professor Frankly, who is also in Rogueport. She then follows Mario for the rest of the adventure.

In the field, Goombella can consult the Tattle Log, giving Mario information about the various places and people they encounter on their adventure. She can also do this in battle, which also reveals an enemy's HP. In battle, she can also use Headbonk, where she jumps on enemies with her head to damage them. When upgraded to Super Rank, she can use Multibonk, which costs 3 FP, to continually use Headbonk on an enemy until she misses an action command. When upgraded to Ultra Rank, she can use Rally Wink, which costs 4 FP, where she kisses Mario, allowing him to attack twice in one turn.

At the end of the game, Goombella sends Mario an e-mail, saying that she became Professor Frankly's assistant in Rogueport. She also gives an update on what has been happening with Mario's other partners. At the end of the message, she hints that she has romantic feelings for him, but Goombella brushes it off.

While Goombella doesn't physically appear in Paper Mario: Sticker Star, she is referenced. When Mario searches the junk yard in Shy Guy Jungle, he can read various papers, one of which is written by Goombella:

Goombella resembles a pink Goomba. She only has one fang on her left side, and has a noticeably smaller mouth. She has blonde hair which is kept in a ponytail. On her head she wears a helmet with a light on it, and around her neck she wears a red ascot. Her Tattle Log is a green book.

Goombella is extremely smart and studious, having been enrolled in the University of Goom. As a student of archaeology, she has a lot of knowledge of the world, as well as street smarts around Rogueport and the other locations she and Mario visit, and is happy to share them. She's also very sassy and at times sarcastic, such as when three Goombas try to hit on her, she says it's "so sweet" that they think she's cute that it makes her feel like "totally barfing". In the English versions of the game, Goombella's dialogue hints at her being a valley girl.

More information about her is revealed through the Tattle Log, including but not limited to: she hates Bloopers, is scared of ghosts, and is jealous of Paragoombas being able to fly.

Goombella appears in Paper Mario: Stolen Worlds. In this game, Wario transforms her into a Partner Card, alongside the other partners Mario recruited on his adventures. After being found, she can be used in battle.

Goombella's attacks from Paper Mario: The Thousand-Year Door can all be used in Stolen Worlds, though Rally Wink now costs 6 FP. He also has an Omega Attack called Stacking Headbpnk, which costs 33% of the total FP, where she uses Headbonk on an enemy four times, dealing heavy damage and sometimes inflicting Crumpled on them. Her Card Perk is that she can attack again after using Tattle, and enemies that are Tattled have a 30% less chance of inflicting her with negative status ailments.

Goombella appears as a unlockable racer in Mario Kart: V² Circuit. Like the rest of the characters, she can be unlocked randomly by placing first in a Grand Prix on any engine class. Alternatively, she can be purchased at the shop by collecting Coins. She is a lightweight with a small size. She has average speed, average acceleration, average handling and average traction.

Goombella appears in Super Smash Bros. Charged as a Partner Card summon. When summoned, he will walk around the stage, and if she is near an opponent, she will use Headbonk to jump on them, damaging them. She will disappear after awhile, though she can be defeated by opponents' attacks.

A female archaeology student at the University of Goom. Goombella can be recognized by her ponytail and pith helmet that features a light that aids her archeological aspirations. With her wealth of knowledge, Goombella serves as Mario's tour guide and assists throughout his adventures. She can use the ability "Tattle" to find her enemy's weakpoints, allowing her to dish out more damage. She uses head butt, Para Goomba wings, and using a catch card to double damage. When in the right hands, she can be set up to be quite a powerful character!

Goombella appears as a playable character in the game. She first appears in the Tower of Smash trailer towards the end of the trailer. She is a representative character for Goombas and thus her move set takes some liberties. 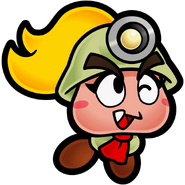 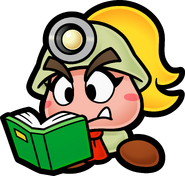 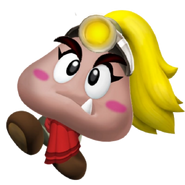