Goombario is a Goomba that appears in Paper Mario. He lives with his family in Goomba Village, and is a huge fan of Mario and Luigi. He is the first party member to join Mario on his adventure to rescue Peach from Bowser after he steals the Star Rod. He resembles a normal Goomba, though has square fangs rather than pointed ones, as well as a blue baseball cap. He is very smart and aware of his surroundings and the people Mario meets, as shown with his Tattle ability.

His abilities are similar to Goombella in Paper Mario: The Thousand-Year Door, and Tippi and Tiptron in Super Paper Mario..

When Mario first falls into Goomba Village after Bowser uses the Star Rod to defeat him, Goombario's little sister, Goombaria, finds him and lets him rest in the village's Toad House to recover. Later, Mario falls off a balcony in Goompa's house, and he finds Hammer that is able to smash through the block Kammy Koopa created to block the path to Toad Town. When the two return to Goomba Village, Goompa suggests that Goombario travels with Mario, which he accepts. He is then by Mario's side for the rest of the adventure.

In the field, Goombario can use his Tattle ability, where he will talk about the area he and Mario are currently in. If he is standing next to an NPC, Goombario will talk about them instead. In battle, he can also use Tattle, where he talks about the enemy as well as show how much HP they have left. His main attack is Headbonk, where he jumps on an enemy to damage them with his head. When upgraded to Super Rank, he can use Charge, which costs 1 FP, to boost his Attack Power by 2. When upgraded to Ultra Rank, he can use Multibonk, which costs 3 FP, which allows him to continually use Headbonk on an enemy until the player misses an action command at Ultra Rank.

Goombario resembles a normal Goomba, but his head is a lighter shade of brown than the typical Goomba. He also has square fangs instead of the standard pointed ones; the only other Goomba to have this trait is Professor Frankly. He also wears a blue baseball cap.

Goombario is a huge fan of Mario and Luigi, and has always dreamed of going on an adventure with them. He is very analytic and aware of his surroundings, which proves helpful on his adventure with Mario. Through his various Tattle speeches throughout the game, more of his personality is brought to light: he is afraid of heights, he likes playing with children his age, he hates fish, he would like an Albino Dino as a pet, and has a friendly rivalry with Kooper. During Tattles, he may also break the fourth wall on occasion.

Goombario appears in Paper Mario: Stolen Worlds. In this game, Wario transformed him into a Partner Card, alongside the other partners Mario recruited on his adventures. After being found, he can be used in battle.

Goombario's attacks from Paper Mario can all be used in Stolen Worlds, though Charge now costs 2 FP and Multibonk costs 5 FP. He also has an Omega Rank move called Stack Attack, which costs 20% of the total FP, where he summons his entire family and they stack on each other like a Goomba Tower. The stacked Goombas then jump on the enemy, dealing massive damage and inflicting Dizzy and Flattened.

Goombario, alongside the rest of his family, appears in Super Mario Spikers as a playable character, combined together as a Power-type Captain. They all ride around in an old car, which according to their bio, the family used ever since Goompa and Gooma married. Also in their bio, Goomama was opposed to the idea, thinking it wasn't safe, but because competing in the Spikers League together was "family bonding", she couldn't get out of it. Their emblem is Goombario's face, and their theme is Western Swing.

Goombario appears in Super Smash Bros. Charged as a Partner Card summon. When summoned, he will use his Tattle ability, talking about the stage the battle takes place. His text box will obscure parts of the screen, making it more difficult to see, similar to Mr. Resetti's role as an Assist Trophy summon in Super Smash Bros. Brawl. Once he is finished talking, he will disappear. 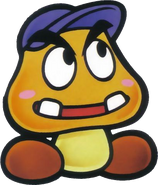 Goombario and the rest of his family in Super Mario Spikers 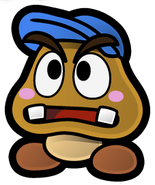 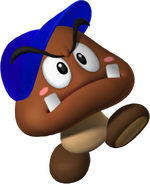 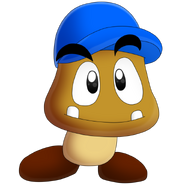