Goombas are mushroom-like creatures that appear in the Mario universe. They used to live in peace with the Toad species until Bowser captured them and turned them against the Mushroom Kingdom. They are the easiest Mario enemies to destroy, and can usually be killed with any attack, including a stomp to the head. They are also one of the most common enemies in the Super Mario series.

Their heads are brown and they have two sharp teeth sticking up from their mouth. They do not clearly speak, mumbling instead. Most Goombas are enemies, but some have allied with Mario. There are many Goomba sub-species, such as the winged Paragoomba and the blue, cavern-dwelling Gloomba.

Goombas tend to be more noted due to their lack of any kind of ability to harm Mario unless they touch him and can easily be stopped through a stomp to the head. In later titles, Goombas have the notable ability to stack on top of each other, making it hard for Mario to get on top of them. They also have much more traction on ice than Mario would.

Goombas appeared in Super Mario: Time Warped One was lucky enough to be the World 1's Boss by being Transformed into Goombull by Kamek.

In Koopaling's Adventure! They are renamed 'Goodie Goombas', mainly because they are on Mario and Luigi's side. They are easily destroyed, as usual.

There is a ghost type of Goomba in the Purple Koopa Bro. (series) called Ghostgoom.

In K-Koopa, Goombas (Like in most games) are the weakest enemies in the game. They will only attack with a predictable charge (5 Stamina Points Per charge) and give 5 Coins and 10 Star Energy. They first appear in Goomba Valley in the game, And if they appear in Latter worlds, They appear in groups of 4-10 Goombas, Making them even harder to wipe out. Their King, Goomboss Also appears in the game.

Sloppy Goombas appear as common enemies in Super Sloppy Bros. when, as usual, a single jump on the head defeats them.

Goomba is a playable racer in almost every Koopa Kart game, except Koopa Kart Galaxy. All those times, he has been a light-weight character.

Goombas make a major appearance as enemies in Paper Mario: The Sage's Quest. They first appear in Spirit Shrine when Mario is heading back to Mushroom Town, but later appear all over the game, most noticeably in Goomba Meadow.

Star In A Party

Goomba is the star of Mario Enemy Party and also a big jumper.

The Goomba joins the Koopa Troop once in again in New Super Mario Bros. 3: Bowser Returns. They are common enemies residing in most worlds, however there are multiple new species of Goombas including an Armored Goomba, a Paragoomba, a Tower Armored Goomba, a Goomba Rider, and Goomboss all appear in the game. Watch out Mario..

Easiest Enemy After All

Goombas appear in New Super Mario Bros.: Clash of the Koopas. Most (not all) of the sub-species appear in the game, such as Paragoombas, Gloombas, etc. They are also the enemy course in World 1.

Goombas appear as court obstacles in the courts: Hammer Bro. Island, Bowser Jr.'s City, and Bowser's Castle. They waddle around the court, sometimes in the way of the net, as shown in Bowser's Castle. If you bump into one, you will drop coins. In Bowser's Castle, Goombas will try to charge into you. You have to jump to avoid getting hit. Goomboss appears in a mission in mission mode.

Goombas appear as semi-common enemies in Super Mario GameBox Demo. They appear in Mario's House, Mushroom Kingdom Way and Bowser Castle Foregrounds. For some odd reason, they look like Galoombas, but are called Goombas in-game. This might be so that they resemble "Goombas" in Super Mario World. Spiked Goombas, Gritty Goombas, Alternate Goombas and Ghost Goombas also appear, oddly looking like normal Goombas instead of Galoombas.

If you use a Mario amiibo while playing Ice Climber 2, you will unlock Cool Cool Mountain where Goombas appear as enemies.

Goombas appear in Super Mario Moose as enemies. Like in most 3D Mario platformers, Goombas charge when they see the player, and can be defeated by one jump. They appear in almost all the worlds, but mainly appear in the first couple.

Mega Goomba was also going to appear as a boss, but was replaced by the Koopalings.

Goombas appear as enemies that appear in almost all levels. They charge at Mario when they spot him. As usual, the player must jump on a Goomba to defeat it.

Goombas appear again in the expanded of Super Mario Moose. They act the same as they did in the original.

Goombas appear as a common low level hotel guest in this game, with several new color variations. They have the exclusive problem of being squished and give Goomba Mushrooms as gifts.

Goombas are the first enemy that appears in Junior's Odyssey. They have 2 HP, and are first seen in the Cog Kingdom.

In addition, Mechagoombas make their debut. They have 4 HP and are immune to jumps.

A Goomba from Super Mario Galaxy. 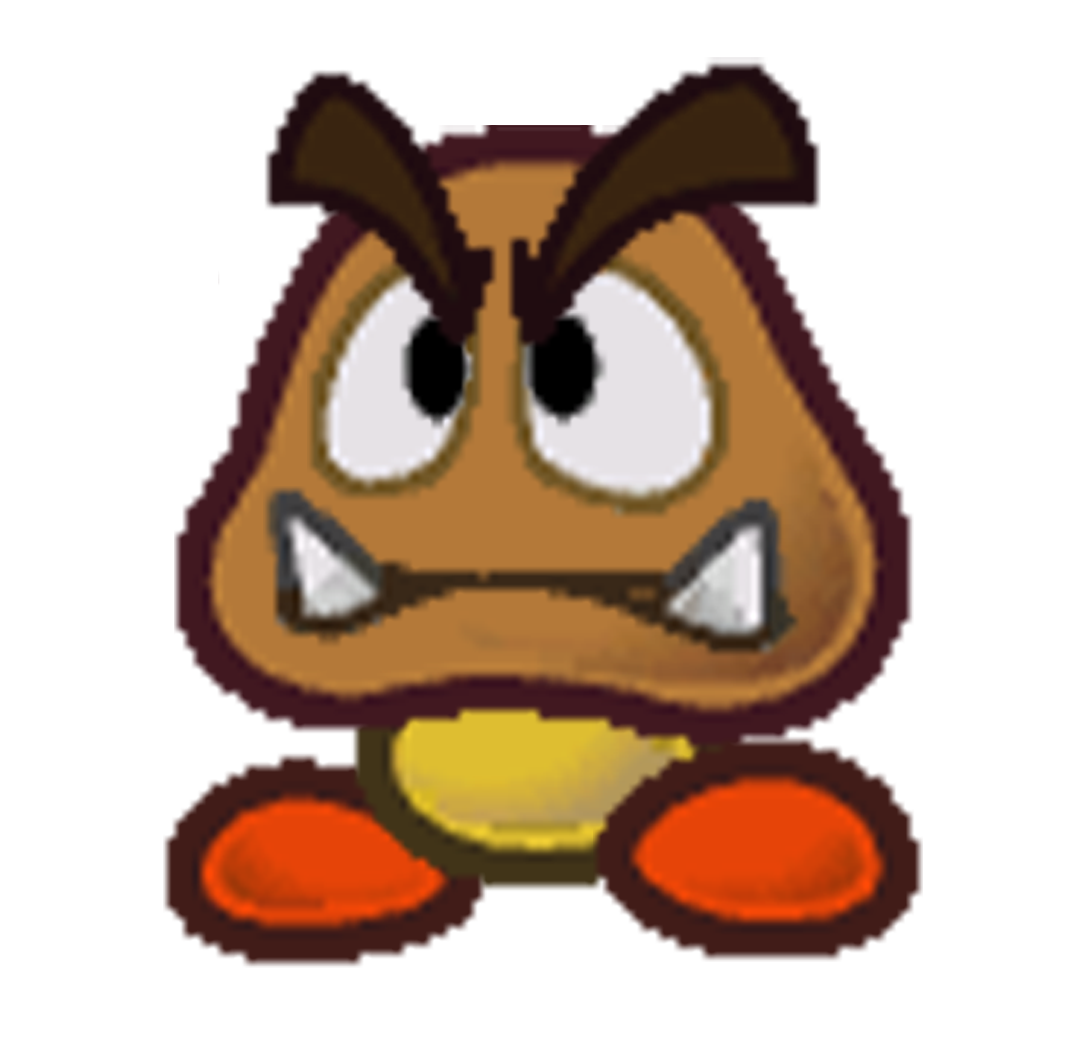 Two Goombas and a Grand Goomba.

A Goomba with hands, a beta element for Mario Party Aurora.

Mario as a Goomba.

A goomba from the Sand Kingdom

A Goombrat, as seen in Mario Party 10.

A Goombrat, as seen in Mario Party: Star Rush.

Sushi Goomba made with Power Point

Goombarr, a species of Goomba which can spit goop.

A skulloomba in paper mario

pixel art of a goomba

A Goomba, as seen in Super Smash Bros. Brawl.

Goomboss, the king of Goombas who first appeared in Paper Mario as a boss.

Goombario, a Goomba with a blue cap character who is one of Mario's partners in Paper Mario.

Goombella, a female Goomba who is one of Mario's partners in Paper Mario: The Thousand Year Door.

Koomba, a member of the Goomba species who has a Green Koopa Shell his.

Epic face Goomba
Add a photo to this gallery
Retrieved from "https://fantendo.fandom.com/wiki/Goomba?oldid=3256890"
Community content is available under CC-BY-SA unless otherwise noted.