Start a Wiki
“Allow me to introduce this green doppelgänger. I call him Gooigi!”
— Professor E. Gadd, Luigi's Mansion


Gooigi is a clone of Luigi created by Professor E. Gadd, appearing in the Nintendo 3DS remake of Luigi's Mansion and Luigi's Mansion 3. He is entirely composed of green goo, hence the name, and uses a gooey version of the Poltergust. He has the ability to travel through barred walls and walk over spikes without getting hurt, though he will dissolve when he touches water. He also serves as the "Player 2" for the Luigi's Mansion series.

Gooigi is a greener Luigi; from head to toe, Gooigi is entirely gooey and green, but still resembles the familiar shape of the plumber, with a "G" on his "cap" rather than the "L" Luigi has. Additionally, Gooigi carries around a gooey version of the Poltergust to assist Luigi.

Gooigi cannot die or have a will of his own. He assists Luigi as his imitation, but has halved health. In Luigi's Mansion, when not in use, he can be seen in the background of E. Gadd's lab in a test tube, staring blankly.

Gooigi doesn't appear in the original version of Luigi's Mansion, but he does appear in the Nintendo 3DS remake. During Luigi's Mansion: Dark Moon, Professor E. Gadd found a strange new blue liquid that was gathered from ghosts. Experimenting with it, he found it didn't react to anything in particular. Heat, cold, poking it iron, pouring it on rubber and a donut had no effects on the fluid. When a ghost spooked E. Gadd, he spilled his coffee onto the ghostly liquid, creating a green goo that stabilized.

It would take on the form of Luigi after several takes and was named "Gooigi". While Luigi was exploring the Old Clockworks, it was sent back in time to the events that the original Luigi's Mansion took place in. This allowed E. Gadd to test further on both Gooigi and Luigi. He serves as the role of "Player 2" in multiplayer, where the second player would control Gooigi while he explores with Luigi.

Gooigi would later appear in Luigi's Mansion 3, appearing as part of Luigi's new vacuum model, the Poltergust G-00. Gooigi acts as a secondary, weaker Luigi that can go through obstacles that Luigi can't with ease and be used to solve puzzles while Luigi's body goes stationary and limp. However, Gooigi melts in water. Gooigi is also able to be controlled by a second player, leaving the standard Luigi to player 1, similar to Luigi's Mansion. When not deployed, Gooigi is stored in a tube on the back of the Poltergust G-00.

Gooigi appears as a Tier 5 unlockable character in Mario Kart 9. He belongs in the medium class of weight for racers.

Gooigi appears as his own character in Super Mario Splashers, being a defensive type character with a chargeable Poltergust that shoots out water. This is stronger, albeit slower than Luigi's version of the weapon. He can also send out a gooey bomb that slows opponents who walk into it. His special attack is creating a running stream of water that will splash anyone who walks into it.

Gooigi appears as a playable character in Mario Kart: Infinity Remix, appearing as a default driver. On the character select screen, he is placed beside Tanooki Mario and Cat Peach, who are also alternate forms of the main characters. Gooigi is a middleweight, meaning that for the most part, his stats are balanced. However, he has among the best Mini-Turbo stats in the game in exchange for his Traction being one of the lowest.

Gooigi appears as a playable character in Super Smash Bros. for the arcade, and is considered to be Luigi's echo fighter. However, his Final Smash is the Negative Zone, where Luigi previously used in Brawl. 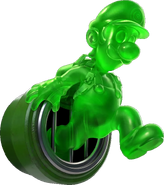 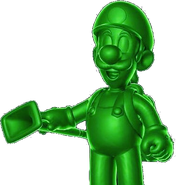 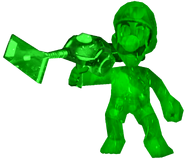 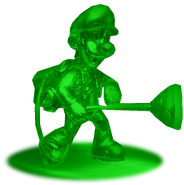 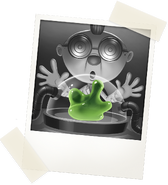 The Pixelator being used on the goo 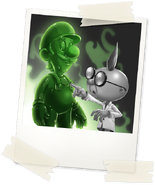 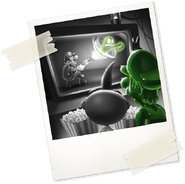 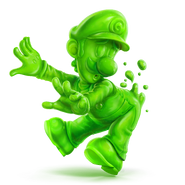 Gooigi's sprite in the SMB1 style in Super Mario Maker Cloud.
Add a photo to this gallery

Pink
Add a photo to this gallery

Retrieved from "https://fantendo.fandom.com/wiki/Gooigi?oldid=3185058"
Community content is available under CC-BY-SA unless otherwise noted.