Start a Wiki
Gohma is a species of recurring Bosses and Enemies in The Legend of Zelda (series). The creature has taken on many appearances generally differing significantly in each although is always depicted as some sort of Invertebrate, commonly a Crab, Spider or Centipede. Gohma's ferocity differs with each rendition although the Spider Variant appears to be the strongest.

The original incarnation (as pictured in the Infobox) appears to have a large single eye with several legs, it has no defences other than closing its eye which is capable of deflecting arrows.

The Crab Incarnation is very similar to the original although gainst a large claw which it can use to further protect its eye, in addition this rendition is more commonly blue than its predecessor. This incarnation also appear in Hyrule Warriors as a Field Boss like Dodongo, it is orange like its original version although posesses claws similar to this incarnation, it is much larger than its initial appearance although is much easier to defeat.

The third ittereation, the Ocarina of Time incarnation has a bizarre structure to it, possibly due to poor lighting it is hard to determine what it is based off. The creature has two large arms as well as some sort of tail appendage that it can spawn eggs from. It retains the single large eye although this time the eye can only be damage when it is a particular colour.

The Wind Waker incarnation, also known as the Centipede incarnation is by far the largest of all incarnations of Gohma and is a lava-dwelling creature. It has a single eye which it can protect with its main two claws, part of its at least 4 pairs of claws (8 in total). The creature also has a large armoured shell protecting it from damage of sharp objects. The creature's inner body appears to radiate heat possibly indicating that it digests lava.

The last incarnation, the Twilight Princess incarnation is another Spider-like appearance for Gohma, this one is called Armagohma, possibly to differentiate it from its predecessors. Armagohma takes a much more traditional and realistic appearance as this time the Gohma's eye is on its Thorax while a Pseudo-Face appears on its front, it posesses 8 legs and a large abdomen from which it can lay eggs. Armagohma's weak spot is again its eye, requiring Armagohma to be shot by an arrow in the back eye and then hammered through use of the Dominion Rod.

The NEW Legend of Zelda

Gohma is set to appear as a boss in The NEW Legend of Zelda.

After Link falls down a hole while traveling with Toruda, he lands in a vast underground labyrinth located beneath the forest. As he realizes his surroundings, he finds himself surrounded by webbing and bones. After several moments, he encounters one of the inhabitants of the tunnels, Gohma (Armored Subterranean Arachnid), who stalks them, waiting for prey to fall into them. A female of its species, it is nearly three times the size of its male counterpart, a typical ratio of its species.

Well adapted to its environment, it has evolved a thick exoskeleton to protect it from predators and cave-ins, a large eye to see in the dark, a powerful paralytic poison in order to prevent its prey from struggling, and long legs to allow easy movement through tunnels.

Link would then go on to run away from the beast, making his way through the tunnels as he attempted to escape the arachnid. He managed to lose it for a short while before she broke her way through the cave wall. After a short fight were she stunned herself several times after mistakingly charging into stone collumns and then having her eye attacked, she managed to knock Link down. Before she could attack again, Toruda arrived and used his lantern to scare it off. Having only grown in darkness, the light of the lantern harmed her sensitive eye.

The Legend of Zelda: Castle of Dreams & Nightmares

Gohma apears twice in this game as a Mini-Boss both times. The first Gohma is the Mini-Boss of the first true Dungeon of the game, in this version Gohma's appear to be inspired by their original appearance in the Legend of Zelda but also by Scorpions as it posesses a large tail appendage with a pair of pincer-like spikes on the end, like all renditions of Gohma its weakness is its eye although it will use its front claws to guard its eye unless distracted and will also use them to swipe the player away.

A Toxic version of Gohma appears later at the 14th Dungeon of the Game, this one appears similar to its predecessor although has a more purple appearance to it, in addition it is now able to shoot acid from its stinger as well as create tremors with its front two claws, it moves faster and spends less time leaving its eye in the open to be shot so the player must be more careful.

Gohma's appearance in Ocarina of Time

The sprite of a Gohma Larvae from Ocarina of Time

Gohma from the original Legend of Zelda

Gohma from BS Legend of Zelda 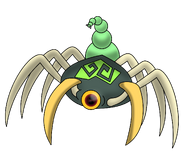 Gohma from Castle of Dreams & Nightmares 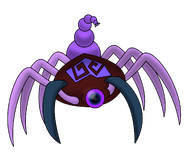 Toxic Gohma from Castle of Dreams & Nightmares
Add a photo to this gallery
Retrieved from "https://fantendo.fandom.com/wiki/Gohma?oldid=2189261"
Community content is available under CC-BY-SA unless otherwise noted.