Godzilla Bones is a boss in Fantendo Silence, of the "Pirates of the Mushroom Sea" level. He is a massive mechanical Dry Bones capable of breathing fire and throwing bones, as well as spawning Dry Bones themselves. He is so massive, he cannot actually walk; he does try to stomp on you, however. To defeat him you have to climb up him and jump on his head. Sometimes, he will jump into the air; if you are climbing on him when this happens, you will fall off and receive damage. As a warning for when he is going to jump, he crouches down first.

Godzilla Bones holds the record for being the first boss coded for the game.

Godzilla bones appears in NSWL as a boss!. He totally throws flaming bones! you have to Pick up his not flaming bones and chuck them at him 5 times!. After doing that 3 times he will gain a Bullet bill gun and shoots Bullet Bills at you!.After hitting him four times he will go red and start shooting Banzi bills all over the place! at this point he becomes very annoying! after hitting him 5 times he is just a pile of bones with a cape and a gun!. 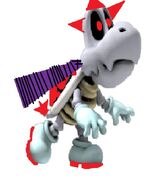 Retrieved from "https://fantendo.fandom.com/wiki/Godzilla_Bones?oldid=2511584"
Community content is available under CC-BY-SA unless otherwise noted.