Godzilla is a giant monster that is famous worldwide for his Godzilla film series and the video game series by Clover Entertainment. Godzilla and his franchise have been created in 1954, and has appeared in three Fantendo games, Godzilla: Destroy All Monsters Brawl. Godzilla: King of Monsters, and Godzilla Universe Online, with a fourth game based off the 2014 American film. Godzilla is also known as the King of the Monsters, as he is indestructible to military weaponry, can breathe atomic fire, is capable of reducing entire cities to the ground, and has fought several other monsters equal in strength to him - and beat them all.

In Shin Godzilla, Godzilla takes multiple forms, gradually evolving over the course of the film. In his fifth form, Godzilla can multiply, as smaller monsters are seen around his tail.

In the late Cretaceous era (70 million years ago) there was a species of therapod dinosaur resembling a large Tyrannosaurus, but with special amphibious adaptations which allowed it to swim between the islands upon which it hunted. This dinosaur species has been dubbed "Gojirasaurus".

A minimal breeding population of gojirasaurs somehow survived the great extinction event which killed off other dinosaurs and continued into the modern era. (Much the way many postulate that breeding populations of plesiosaurs survived to become modern lake monsters.) Adaptations which aided the gojirasaurs in their survival probably included the ability to lay dormant for extended periods of time, and to endure high heat and radiation environments like active volcanic regions where man rarely encroaches. Living in the South Pacific, the gojirasaurs were observed only on rare occasions by the island people of simple fishing villages who incorporated the stories of these strange beasts into their folklore.

All but one (or perhaps two) of the gojirasaurs were apparently destroyed in World War II. One gojirasaurus was severely injured by Allied attack, but managed to cling to life on the remote island of Lagos (near the Marshal Islands in the South Pacific Ocean) until post-war nuclear tests caused him to be subjected to a huge dose of radiation. The radiation caused the gojirasaurus' already radiation-attuned physiology to rapidly mutate/adapt. The animal grew and changed until the gojirasaurus had developed into an entirely new form of creature... Godzilla!

Godzilla then went on a rampage in Tokyo, killing thousands of people and destroying the entire city. Godzilla was then defeated by the Oxygen Destroyer, which dissolved him into nothingness. However, for some unknown reason, Godzilla returned. You may be thinking, "How did Godzilla survive?" He didn't. This was a NEW Godzilla. He fought another creature named Anguirus in an epic battle that destroyed Osaka. Godzilla killed Anguirus and left Osaka in ruins. Then, Godzilla was buried under rock and ice by jets that fought against him near a small icy, island.

In 1962, Godzilla was freed from his prison, and has been terrorizing Japan since. 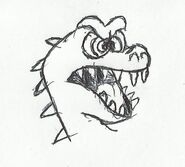 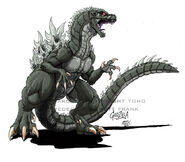 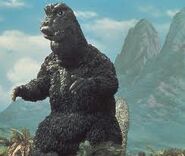 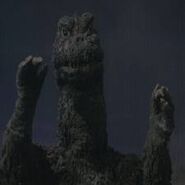 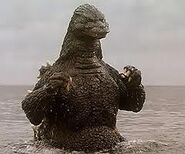 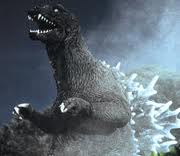 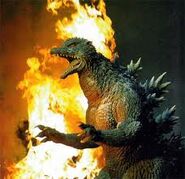 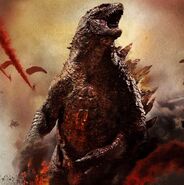 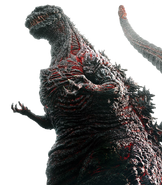 Godzilla 2017 (Monster Planet)
Add a photo to this gallery
Retrieved from "https://fantendo.fandom.com/wiki/Godzilla?oldid=2583357"
Community content is available under CC-BY-SA unless otherwise noted.