Start a Wiki
Goblin is a character introduced in Fierce Tales. He is a goblin thief that got exiled from his tribe because he was "too cute", even through he has above-average dexterity with weapons and that all goblins of his species look nearly identical.

Goblin is a light grey humanoid creature of short stature, his head reaching the average height of a table. He doesn't wears much other then brown shorts, which are slightly tattered. He seems pretty skinny; while you can't see his bones, he isn't exactly muscular either. He doesn't seems to have any fingers and toes, which makes his ability to hold things curious. He has black oval-shaped eyes, through these are rarely shown as blue instead. He seems to be missing some teeth through he is still able to eat correctly. He has two large ears which seems to be able to tilt in all possible angles; it is unknown how he hears from these. He's capable of using magic although he usually does not use it, resorting to weapons such as swords instead.

Little is known about Goblin's backstory. As said above, he was strangely exiled from his tribe because of his cute appearance, most likely to have an excuse to exile him in the first place. His tribe was implied (and later confirmed) to be a pirate tribe, as he was exiled from it on a boat that looked like a pirate ship in general. It is possible he had an history of beign mischievious, since most of the grey goblins in the intro seemed pretty angry about him and were pretty happy when he was kicked. Apparently, he was also rather weak and useless to them. He was suppodly glad to be exiled, however, because he though pirate life got pretty boring.

Goblin is a thief, but he still has standards. He has two motives for stealing; it allows him to get "free" money, but he also does it because goblins are subject to social injustices. They are often called dumb and weak and are thus given low salaries. While he is able to prove they are not dumb and weak, he seems to have forgotten part of their reputation is because they have a tendency to steal or vandalise things.

He is shown to be much more determined then one would espect at first, and won't stop until he is unable to fight at all. He seems slightly competitive, but he dislikes getting attention most of the time. He likes making puns and enjoys taunting other people, although he does not mean any harm when doing so. In Fierce Tales, his main game, he's working in order to save innocent creatures and stop havoc caused by stronger creatures, showing he cares about other people. His favourite food is apparently blueberries. As with nearly everyone in his home world, he refuses to harm blobs and dislikes anyone he catches hurting one.

Despite beign a thief, Goblin is in fact an help to those he sees as good. He has a tendency to steal important or dangerous objects the "villain" planned to use. Sometimes, he gives said object to the "heroes", but leaves his identity anonymous. That doesn't means he's all good, through; for example, it's implied the invite to the sports resort in Fantendo Sports Resort he got wasn't meant for him.

Along with four secondary weapons:

Of course, he can use other weapons, but those are his most notable.

Goblin made his debut in Fierce Tales, as it's main character. In the original version, he only used his three main weapons, but he was given his four secondary weapons as well later. This game is often considered Goblin's "home game", althrough he mostly exists in crossover games.

The three original Goblin classes appear in Fantendo Smash Bros. Shattered as customizable characters, like Mii Fighters in Super Smash Bros. 4. They are considered unlockable, being "unlocked" by creating one.

Some interesting notes is that they take advantage of it being a crossover; the Magician Goblin has a scarf similar to Volt's, the Defender uses a shield with the Fantendo Smash Bros. series logo on it, and the Swordsman is implied to have taken Danjixrus' blade.

There seems to be multiple Goblins in this game, oddly enough. However, most other goblins are very similar to him anyways.

All three classes of goblins appear as a characters in Fantendo Brawlers. He can trigger one of the chats availlable in the game, the Fierce Transmissions.

Goblin appears in Fantendo Sports Resort as a member of the Blue Team. He has a new, less "wild" outfit in this game. His doppelganger is Animatronic.

The three Goblin classes are characters in P.O.I.S.O.N. Unlike Fantendo Smash Bros. Shattered, however, he is not customisable.

Goblin appeared in Fantendo - Mansion as a playable character. He is able to use various of his weapons in order to fight, such as one of his swords, his pearl staff, his shield and even his bombs.

Goblin appears in Fantendo Smash Bros. Fatality as one of the default characters. He can attack with various elements of his arsenal. Class Switch allows him to change his class, and thus his attributes and basic attacks, but his special attacks are always the same.

He is ranked D- on the tier list; he's certainly not bad, but he's outclassed in most aspects. However, he has been able to rank rather high compared to some the lower-tier characters thanks to his ability to contain 3 playstyles at once. Players who want to play him should use all three playstyles if they want to use him; else, there is no reason to use him over a higher tier character who outclasses one of his 3 roles. 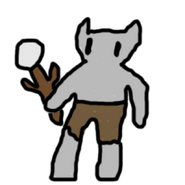 Goblin as the Magician. 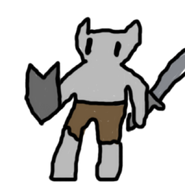 Goblin as the Defender. 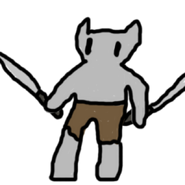 Goblin as the Swordsman.

As a Magician, by Mattgamer03.

Goblin as the Swordsman in Fantendo Smash Bros. Shattered.

Goblin as the Defender in Fantendo Smash Bros. Shattered.

Goblin as the Magician in Fantendo Smash Bros. Shattered.

Nilbog, one of Goblin's alternate skins in Fantendo Sports Resort.

An alternate skin of Goblin in Fantendo Sports Resort based on Guest.

A skin of Goblin in Fantendo Sports Resort which is based on Searchie.

A Michael the Minion-based skin of Goblin seen in Fantendo Sports Resort. 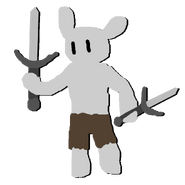 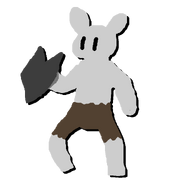 An updated version of the Defender's artwork. 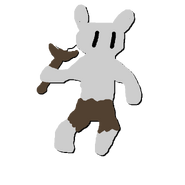 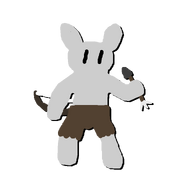 Goblin as the Archer. 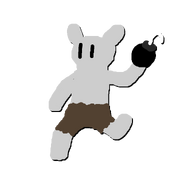 Goblin launching a bomb as the Bomber. 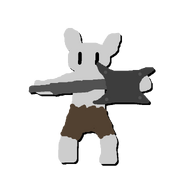 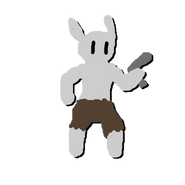 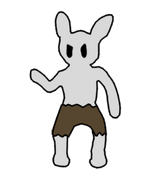 A picture of Goblin.

A genderswapped version of Goblin by Yveltal717. 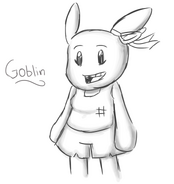 A revamped version of the genderswapped Goblin made by the same user.

A picture of Goblin by Trucky. 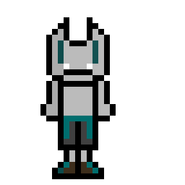 Another, updated sprite of Goblin by Sr. Wario.

An alt of Goblin based of Green Goblin in Fantendo Sports Resort.

An alt of Goblin based off Sableye in Fantendo Sports Resort. 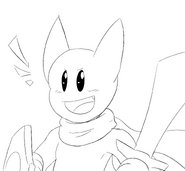 A picture of Goblin by Ziegs. 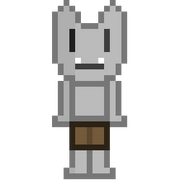 Another sprite of Goblin by Sr. Wario.

A drawing of Goblin by Scratch. 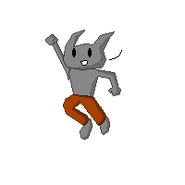 Pixel art of Goblin in a "familiar" pose by Pyrostar.

A gif of Goblin by Dylan.

A drawing of Goblin (or rather a Lethalverse version of him) by Sroo.
Add a photo to this gallery
Retrieved from "https://fantendo.fandom.com/wiki/Goblin_(Fierce_Tales)?oldid=3195581"
Community content is available under CC-BY-SA unless otherwise noted.