GearInstinct, starring the protagonists The Legacy and their leader Glenn as the series follows their adventures to fight against evil and the supernatural.

The series is a turn-based combat RPG platformer, split into two sections, being Battle and Overworld. In Battle The Legacy use turn-based combat with action commands, quick-time events and disposable items for The Legacy or the enemy to use in battle, where upon defeating the enemy The Legacy earn money and experience points. In the Overworld The Legacy can roam around freely doing sub-stories around the places The Legacy travel to, accomplish battle missions to earn cash and experience points and continue the main story by completing story objectives.

Throughout the series, the player control up to two interchangeable The Legacy members in the overworld as they travel across Nexonation. In the overworld, The Legacy can mainly roam around each area freely, allowing The Legacy to participate in sub-stories involving citizens of each area, defeat random enemies in battle and also relax in side-activities. The story usually opens up new areas with new chapters, which also contain new enemies, side-activities, sub-stories and NPCs for The Legacy to interact with. Whilst The Legacy travel across Nexonation, they will be required to use their unique abilities in order to make progress in the story, such as breaking brand new paths or solving puzzles with knowledge. 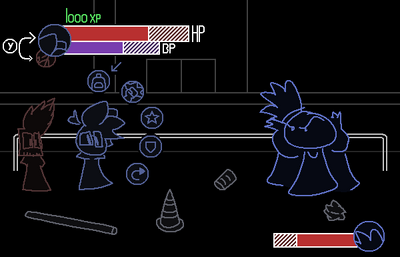 The battle system used in Glenn's Adventure is turn-based, based on a side-view battle system similar to Paper Mario's battle system. The system is engaged in combat if a visible enemy is either attacked or seen in the sight of the enemy; depending on who gets attacked first, the battle system will determine if the battle will start with The Legacy's favour or the enemies favour, meaning that either one of them will start first, allowing either one to strike one another.

In battle, The Legacy is given five options, viewed above the current character in battle, with the enemy/enemies in view on the right side, differing from what enemy The Legacy engage battle with. The five options given to The Legacy are:

Depending on the outcome of a battle, either the enemy or The Legacy will be victorious. For The Legacy to win a battle, the player must eliminate the enemy/enemies on the right side, where their HP runs down 0 by attacks or by the enemy running away from battle; if The Legacy were to run from battle, the enemy will remain visible in the overworld. For the enemy group to win in a battle against The Legacy, they must overpower them by lowering their HP to 0 for the current partners in battle, which will end the battle and return back to the overworld, with The Legacy heavily injured, where in boss battles the player will be given the option to try again or to return to their last save. Stats for The Legacy can be seen in the top left of the screen.

If The Legacy is far more powerful than the enemy that they are facing, the enemy will be defeated, only if they are approached.

In battle, only two partners can be used in battle and if both are eliminated, the battle is over. The members have dedicated buttons for their actions and can be swapped once per turn. During battle, each Legacy member have unique battle techniques, activated by using their designated button presses during combat. The unique battle abilities also change alongside the character's unique ability.

The enemy can perform an attack if The Legacy has finished their turn or have approached the group first. All enemies in battle can attack one of the current Legacy members on screen, decreasing HP. Certain enemies can call for help in rare occasions, depending if they are by themselves or are low health and can also use nearby objects as an attack. After their turn is finished, the turn shifts back to The Legacy.

The Legacy each have their own stats, that can be increased by accessing their respective Levelling System. Stats are unique to all Legacy members. There are two stats, Battle and Endurance. Battle stats are where the player can level up their normal attack damage or upgrade their unique abilities. Endurance stats are where the player can upgrade health, ability power and both offense and defence, being upgraded together. To level up the stats, the player can spend any EXP that they have earned, with the cost of EXP slowly increasing as the player progresses through the stats.

The Earth in Glenn's Adventure is fictional, featuring call-backs to actual locations and countries. Set within the far future, the original Earth was destroyed and left frozen after The Four Warriors failed to protect humanity from the powerful threat known as the Mesteries, but mankind wiped everything out before the Mesteries could evolve using the Mystical Stones. Left dormant, Earth eventually began freezing, forming another ice age. Millenniums after the Earth freezing, the Earth eventually dethawed, featuring drastically different land formations. Upon the death of all Four Warriors, their souls ascended into the space above, where they all took on the form of a Save Stone. Save Stones carrying the soul of a warrior or legend, such as musicians or in this case The Four Warriors, into a person compatible of receiving their spirit and their will, becoming their successor or reincarnations. Upon merging, the person will receive all scars and marks from the Save Stone's soul, and will be able to sense other successors. Although Mesteries were believed to be wiped out, a mother and its baby found a way to survive death. However, they would eventually find themselves abducted, with the mother taking the fall for the baby. Eventually, the baby Mestery grew up, and turned onto the strange creatures that abducted them, using their equipment to find mercenaries to help her plan with taking over Earth. With the spirit of the original Four Warriors belonging to the new reincarnations, they are caught in many supernatural events which usually involve The Legacy confronting the powerful evil. With the Four Warriors' souls now belonging to their successors, their fates are forever twisted as they are forever fated to encounter either the supernatural or evil.

V201X. Misstical Mystery is the first part of Glenn's Adventure, as the successor of the Four Warrior's leader, Glenn, inherits the will of the Four Warrior's leader of defeating the Mesteries once and for all and is tasked to recruit the brand new Four Warrior successors in order to defeat an imminent threat known as Misstical, the last Mestery remaining. Glenn along his journey, must also gather all the Mystical Stones in order to help improve his brand new Mystical Power and prevent Misstical from ever getting one.

The Legacy after Misstical Mystery would eventually go into hiatus, with each member going off to do their own interests. However two years later, a strange galactic threat would invade Nexonation, known as INTERSTER, an intergalactic authoritarian government led by their leader, Kristal. Intending on taking over the Milky Way, the Four Warriors, with the exception of Michael and Glenn, were kidnapped and intended to be dissected in order to improve and upgrade their own army. During the stay in Nexonation, they would strike a strange large crystal into the centre of Bridged, powering Nexonation in order to keep it airborne, however corrupting one third of Nexonation into the Corrupted Lands, and another third turned into the Fable Land. Eventually, a makeshift group known as The Test Subjects, comprised of leader luke, Michael, Vincent, a half-corrupted mechanic with a short fuse known as Lucy, and Luke and Glenster's dog Goldie who would find himself half-fable, would bring down INTERSTER and Krystal, leaving them locked secured by the Blue Lights Foundation down on a wasteland Earth. Nexonation itself however would stay the same, flying and transformed.

Around the same time that INTERSTER landed on Nexonation, Glenn would go into hiding in Nexonation living as Daisuke Fuma, a fake name, in order to live a quiet life like he used to. However, it would take only one year before he would be pulled back into the supernatural.

V202X. The Void is the final part of Glenn's Adventure, as Vincent and Glenn are tasked by the Blue Lights Foundation to recruit The Legacy after years of being inactive in order to locate and defeat Cynical, someone linked to all of the strange occurrences on Nexonation and behind the death of Earth.