Glalie, known in Japan as オニゴーリ (Onigohri), is an Ice-type Pokémon. It is one of Snorunt's two possible evolutions (the other being Froslass), who evolves into Glalie when reaching level 42. Glalie can Mega Evolve into Mega Glalie when holding a Glalitite.

Glalie is a large, spherical Pokémon, resembling a black rock covered in an armor of silvery ice full of holes, resembling a mask. Four of these holes are seen on its face, and three of those reveal its blue eyes and its giant maw. On each side of its head also protrudes a cone-shaped horn with light stripes.

Glalie can freely control ice, being able to freeze the air's moisture in any shape or form. Glalie's own icy armor is made via this ability, which won't ever melt. Glalie also uses this ability to trap its foes and prey, freezing them solid. After freezing them, Glalie consumes them in a leisurely fashion.

When Glalie Mega Evolves, the upper half of its face gets even more covered in icy armor, while the lower half loses the armor in favor of beard-like rocks. The only parts of its lower-body armor left behind are two chunks of ice. Glalie's conical horns become more icy, and a third horn grows out of its forehead, covered slightly in lack rock but ultimately made of pure ice. The holes for its eyes got slightly rounder and its pupils have become red. The process of Mega Evolution leaves an over-excessive amount of energy gushing out of its mouth, destroying its jaw, leaving its mandible hanging and being unable to close it. This reveals the insides of its mouth being blue and completely empty.

Mega Glalie emits even colder and stronger air than its regular form. In its new form, it can hurl its opponents into its gaping maw and blast them with cold air to freeze them in an instant.

Being the Face Pokémon, Glalie may be based on human features, particularly the face of a cold, distant person. Its icy armor also resembles a hockey mask, and the conical horns on its head may remind one of Oni. Glalie also resembles a hailstone.

Glalie may be a combination of glacier and goalie.

Onigohri may come from 鬼 oni (demon) and 氷 kōri (ice). The "Gohri" in its name is phonetically similar to goalie, and its name may also be a pun on onigiri. 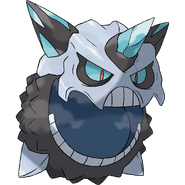