Start a Wiki
Gina is a magical genie from the Freezeen Kingdom.

Not much is known about Gina, but what is known is that she was not always a genie. Instead, when Bowser took over her kingdom, he turned her into a genie and she was rescued by Fishin' Lakitu, who then took care of her lamp until the heroes arrived.

Gina's first appearance was in Mario 3D World, where she served as the Super Guide. You could also play as her by canceling Super Guide in the middle of her adventure through the level- however, if you die as her, you will become Mario, Luigi, Toad or Green Toad again.

Gina will also appear in an upcoming Mario Sports Mix game by Peanutjon. Her type will be Tricky.

She is a partner found in Chapter 3, on Genie Island.

Her abilities in PMCS.

In the field, Gina can pull you into your lamp, making you invisible. This is similar to Bow and Vivian.

Gina emerging from her lamp, which is held by Fishin' Lakitu.

Artwork revealed of Gina for the unnamed Mario Sports Mix.

Some concept arts of Gina. 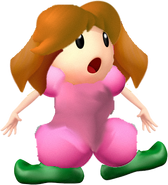 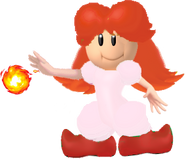 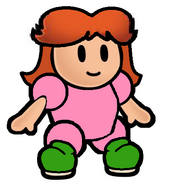 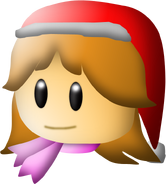 Gina Christmas art by Toad'ShyGuy (t∣b∣c)
Add a photo to this gallery
Retrieved from "https://fantendo.fandom.com/wiki/Gina?oldid=3065258"
Community content is available under CC-BY-SA unless otherwise noted.