Gigalith (Japanese: ギガイアス Gigaiath) is a Rock-type Pokémon introduced in Generation V. It evolves from Boldore when traded. It is the final form of Roggenrola.

Gigalith is a blue quadruped Pokémon, with various spiny, crystal-like red features jutting out of its body. Its limbs have gray joints and are topped with red crystalline features, with the two claws on each limb being similar features. It has a red eye inside each ear. Several of the crystalline features are present on its face; three below its eyes, one in the middle resembling a crest, and other crystals to the sides of its head.

It compresses energy in the core inside its body that is enough to blow away mountains. It can also store sunlight in its orange crystals and shoot powerful energy from its mouth, though it loses this ability at night or during rain. It lives in caves and tunnels deep underground. Gigalith is a popular partner for construction workers.

Gigalith is changed to a Rock/Light type. 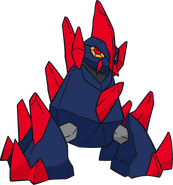 Menusprite
Add a photo to this gallery
Retrieved from "https://fantendo.fandom.com/wiki/Gigalith?oldid=3201678"
Community content is available under CC-BY-SA unless otherwise noted.