Start a Wiki
“The Harbinger, Ghroth, roams the cosmos, feasting upon the stars and planets, wholly indifferent to the wails of those it eats.”
— Ghroth's description in the Book of All 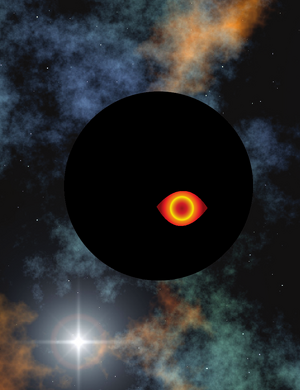 Ghroth the Harbinger, (pronounced "guh-HROTH") also called The Eater of Worlds, is a mysterious and extremely powerful primordial being that resembles a huge, dark-colored planet, slightly smaller than a blue giant star. It roams the cosmos, feeding upon planets with sentient life, and is said to destroy a planet every 10,000 years, on the day of the new year (Dec. 31). It was responsible for the destruction of Kynarth, as well as its people, the Goetians. Apparently it has been around since the beginning of time.

Ghroth's only feature is a gigantic red eye that it can close to avoid detection. When its in the process of devouring a planet, pitch-black tentacles, each as thick as a skyscraper and of seemingly infinite length, will emerge from its surface and envelop the planet; everything those tentacles touch, including the planet itself, ends up decaying. The very essence is absorbed into the tentacles as sustenance for Ghroth.

It must actually finish destroying the planet before the day ends, or else it will go dormant again, until the next 10,000 years pass.

He is one of the Balance Keepers of the Fantendoverse, he keeps the planets in order by devouring one every 10,000 years.

Ghroth actually appears as a stage here, set against the awe-inspiring backdrop of the cosmos. It is a fairly difficult track, since tentacles will randomly pop out of its surface.

The track is fairly featureless besides, save for the ruined buildings scattered here and there. Could these be the remnants of the civilization of Kynarth?

During the prologue of the game, when Gray Demon is traveling through space towards White Goddess' Palace Ghroth is seen in the background. Gray Demon doesn't seem to notice Ghroth however as it appears to have gone dormant during that time.

Here, Ghroth is an available stage.

A full gallery of all artwork of Ghroth.

As he is depicted in Fantendo Smash Bros. Shattered.
Add a photo to this gallery
Retrieved from "https://fantendo.fandom.com/wiki/Ghroth_the_Harbinger?oldid=2031379"
Community content is available under CC-BY-SA unless otherwise noted.