Start a Wiki
“Didn't you know? Ghost don't die! It's useless to fight against me! Bwahahahahahaha! Wait, what do you say? ... You're a ghost too? You're a ghost too! Arrghh, I should have thought about that before!”
— GherooB, ruining his own speech in TaBooki: Growing Up


GherooB is the main villain in the TaBooki series. After TaBooki accidentally became the source GherooB needed to fill his crown with ultimate power so he could take over the world, he started the hunt on him. GherooB has a large blaster as right arm, that he uses as main weapon in battles. In his crown is a diamond, that needs to be activated by a powerful source.

GherooB is a large, black Boo. He wears a pink crown shaped like a diamond. In the crown, an actual diamond is held. He has a large, black blaster as right arm and he wears some kind of laser eyepatch. His eyebrows are also different from a regular Boo, meaner and bigger. His other eye is black, but a bit red colored. He has 2 sharp theeth, of which one is gold. It also looks like someone took a large bite out of his big, purple tongue. He got a Boohemoth transformation, which makes him Boohemoth-sized but have even more meaner eyebrows and more powerful cannon that looks more epic.

GherooB, of course, is very evil. He dreams to be ruler of everything and well-known by everybody. He dreams of money, money and money. He doesn't care for his minions. He thinks he really is the most evil being in the world, but actually he's not. He always prepares evil speeches for when he has to face of against someone, but he often fails in it for random reasons. If he is in a big troubles, he will not afraid to transform by his special diamond to become a even more powerful, Gheroomoth, a more Boohemoth-like, but still have fangs instand of normal teeth and have two golden teeth instand of one. This transformation helps him to be more evil.

GherooB makes his debut in the RPG game TaBooki: Growing Up. He is the main villain and is fought twice. He uses his blaster as main weapon. In the game, he appears to be a little bit clumsy, as he fails in his speeches.

Despite being made by Samtendo09 (t∣b∣c), this user made GherooB as the main antagonist, and he wanted to relives depressful pasts for all characters, and even intensify them. He also forced villains to have evil funs but some of them tend to team up with heroes to repel him or to do on it's own as usual. 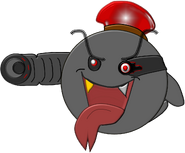 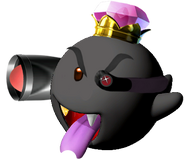 Newest 3D Artwork
Add a photo to this gallery
Retrieved from "https://fantendo.fandom.com/wiki/GherooB?oldid=3305048"
Community content is available under CC-BY-SA unless otherwise noted.