Gengar is a dual Ghost/Poison-type Pokémon species. It has the same abilities in battle as a Haunter, only stronger. The presence of a Gengar can cool the temperature of the surrounding area by 10 °F. They evolve from Haunter if it is traded to another player, who evolve from Gastly. They are a Generation I Pokémon. Gengar are dark purple, Pokémon with a roundish body. Gengar's hands now connect to the rest of its body. In addition, it now has stubby legs and with darker purple soles. And a short, pointed tail. Gengar has a spiky fur-covered back. Gengar's eyes are now red, and its mouth is a teethy sinister grin. His shiny form only changes his body color and make it darker.

It can Mega Evolve into Mega Gengar when using the Gengarite.

Gengar serves as a Mayor for Pokémon Town, He deals with Issues about pointless films by mocking them, he is also a meanie who doesn't care for others except his family.

Gengar also serves as a mascot and Leader of Team Meanies in the Mystery Dungeon series, A group of backsassing Pokémon who dreams of World domination. 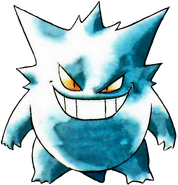 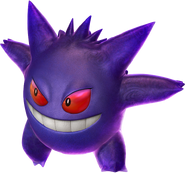 Pokkén Tournament
Add a photo to this gallery

Generation VI (Mega)
Add a photo to this gallery
Retrieved from "https://fantendo.fandom.com/wiki/Gengar?oldid=3117091"
Community content is available under CC-BY-SA unless otherwise noted.