Gearmos are allies from the Super Mario series, that first appeared in Super Mario Galaxy. They are depicted as maintenance robots that have to clean up the galaxy. Due to this characteristic, they tend to appear in more industrial galaxies.

Gearmos debuted in Super Mario Galaxy, appearing at ammo depots. They ask Mario for help cleaning up the rubbish in the depots and blowing up all the garbage in a time limit will reward Mario with a Power Star.

They appear in Battlerock Galaxy, Dreadnought Galaxy, Toy Time Galaxy, Buoy Base Galaxy and Grand Finale Galaxy. A Gearmo also appears in the Engine Room of the Comet Observatory.

Gearmos also appear in Super Mario Galaxy 2 with the same roles. Two Gearmos need assistance for help cleaning up their depot and ask Mario to clean it up. Cleaning up all the garbage in the time limit will award Mario with a Power Star.

A Gold Gearmo and Silver Gearmo will appear on the Starship Mario after completing specific missions. 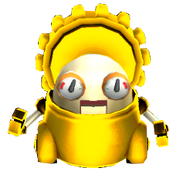 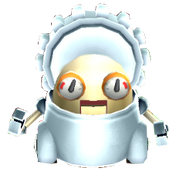 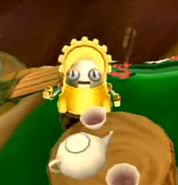 The Gold Gearmo on the Starship Mario
Add a photo to this gallery
Retrieved from "https://fantendo.fandom.com/wiki/Gearmo?oldid=2552070"
Community content is available under CC-BY-SA unless otherwise noted.