Gary Doyle is a Splatoon fan character created by TheFazDude. He is a young Inkling, hailing from Inkopolis. He mainly serves as a mascot for Faz's work, although he has made appearances in various crossover titles.

In short, Gary can be described as an average Inkling boy build-wise. He has the standard figure for male Inklings, but is a few inches shorter than the average height of one of his age (a fact which bothers him greatly). His eyes are a deep blue.

Due to a genetic oddity, Gary's natural ink color is a bright red, similar to the ink used for Team Ketchup. While this doesn't interfere with his ability to shift his ink color, he usually keeps it red (aside from Turf Wars), feeling as doing otherwise would be lying in a sense. His hairstyle is the "Topknot", a ponytail-like style in which two medium-sized tentacles protrude from his hair. Four smaller tentacles are also present further down.

Gary's usual outfit consists of the Retro Sweat, a pinkish sweater adorned with a image of Judd and a phrase in the Inkling language, black shorts with a red stripe on the side, and the Orange Arrows, a pair of orange and blue sneakers.

Gary can best be described a optimistic, yet awkward person with a big heart. He's usually very polite and caring, often striving to do the right thing. However, he is also socially anxious, which can lead to awkward encounters, especially around newcomers. Due to this, he often second-guesses himself in conversation and apologizes profusely for any inconvenience.

Despite all this, he'll take any opportunity to make a new friend, and keeps the ones he has close. His empathy has also given him a strong sense of justice, with one of his greatest pet peeves being bullying and inequality within the community.

A notable trait about Gary is his passion for video games. While he's willing to discuss other topics, conversations about gaming get him particularly interested, and can lead to a lengthy tirade about the subject from him. Alongside video games, he has also taken up an interest in singing, hoping to become a famous musician one day.

However, despite Gary's usual enthusiasm, he can be quite timid and shy at times. He also stresses somewhat easily, usually being caused by him trying to live up to the assumed expectations of others. It's this fear of letting others down which keeps him from coming out of his shell at times.

However, his greatest flaw is his inability to control or mask his emotions, especially if the situation at hand involves something or someone he deeply cares about. He's prone to getting flustered or angry if pushed, which often times leads him to making irrational decisions. Due to his emotional nature, he is also quite easy to read, and most can gain an understanding of his current mood solely by his facial expression.

Some of Gary's behaviors are due to him being on the autism spectrum, such as his anxiety and video games being a special interest of his.

Gary has the abilities of an average Inkling. He possesses the ability to generate ink, which he can shoot at enemies. He has a number of weapons he can use his ink with, but is mainly an N-Zap '89 main. However, he is only slightly skilled with these weapons. He can also turn into a squid and swim around in the ink he creates. He is capable of Super Jumping, which allows him to launch himself vast distances.

Due to a pair of uniquely developed vocal cords, Gary also possesses a powerful voice, which he can raise up to 130 decibels, allowing him to be heard from over a mile away. The most common application of this ability is utilize sound waves to produce various effects. This ability has two primary applications, both named by Gary himself:

However, both attacks are only at their strongest if Gary partakes in a few minutes of vocal exercises before using them. If used too long/often or without warmup, they can easily result in damage to Gary's throat. In addition, the nature of his vocal cords tends to cause his voice to rise in volume and pitch should he get panicked or angry, causing quite a din that can be painful to listen to.

Aside from his combat-based abilities, Gary has also demonstrated considerable singing talent, being able to hit some very high notes with enough vocal exercises beforehand. Due to his vocal cords, these high notes can hit a register capable of shattering glass.

Gary was born with two abnormalities; a bright red ink color and abnormally developed vocal cords. Despite this, he was raised as any child would be in Inkopolis, leading a generally good life without anything special happening. He developed a love of video games and music at a young age, leading to them becoming his favorite interests. However, upon entering school, he struggled with making friends due to his abnormal ink color and general awkwardness. This lead to him being picked on at times, which he never talked about to any of the adults in his life.

However, it was during an encounter with some of his bullies when Gary discovered his vocal ability. Having been pushed to the breaking point by the teasing, he screamed at such a volume that a few of the school's windows were shattered by the sound. While this did result in the teasing coming to an end, it did get Gary into some trouble with school officials. Feeling remorse and shame for the incident, Gary vowed to control his abilities as much as he could.

Many years after this incident, Gary moved out of his parents' house after finishing school, now trying to survive on his own in the world. While he did find a small group of friends, he still feels somewhat discontent with his life, yearning for something more.

Gary appears in Random Rumble: Revamped as a modded character. He is designed as a semi-clone of Smash Ultimate’s Inkling, with the only major change being the replacement of the Splat Roller with the Woomy of Doomy (an early name for the Wailing Waves).

Gary appears in Nintendo & Fantendo Play: Dodgeball! as part of the Green Faction, the team consisting of Nintendo fan characters.

Gary appears in Fantendo Smash Bros. Something as an Assist Trophy.

When Gary is summoned, he stands in place, firing ink at enemies with his N-ZAP '89, which will increase the damage his targets take. After some time, he finishes attacking by using Wailing Waves, creating damaging sound waves that break shields and can cause powerful damage, before going away. He can be KOed.

Gary appears in Fantendo's Card Cataclysm as one of many Hero Cards.

Gary appears in Super Smash Bros. Unbounded as a downloadable Solo Fighter and the fourth DLC fighter overall, released to commemorate the Ketchup vs. Mayo Splatfest rematch in Splatoon 2.

Gary appears in Fantendo Minigame Mania as one of its many playable characters, being a Super Rare character hailing from the Splatoon franchise. This makes him one of the game's few characters to hail from a non-Fantendo property.

Gary appears in Tetris Attack: Fantendo Frenzy as a playable character, having been added to the game as a free update.

Gary appears in CrossClash as a starting fighter. 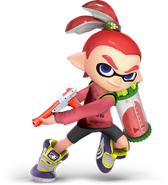 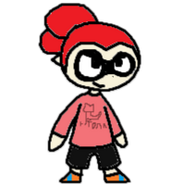 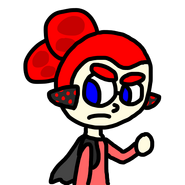 Gary in a Hero Suit, as seen in CrossClash.
Add a photo to this gallery 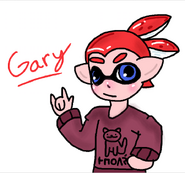 Gary as Squidward. Drawing by CrakaboLazy4090.

Gary in a Hero Suit. Drawing by Samtendo09.
Add a photo to this gallery

A 3D render of Gary. 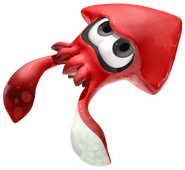 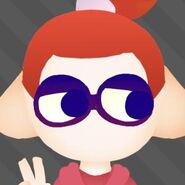 Gary's head in the style of a Super Smash Bros. stock icon.

A sprite for Gary, resembling the Inkling Boy costume in Super Mario Maker. 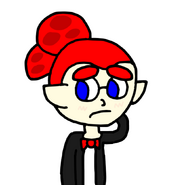 Gary in a tuxedo. Created for Fantendo Prom 2020. 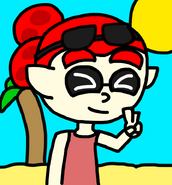 Gary at the beach. Created for the Beach Day Community Art Prompt event.
Add a photo to this gallery

Retrieved from "https://fantendo.fandom.com/wiki/Gary?oldid=3281791"
Community content is available under CC-BY-SA unless otherwise noted.