Gardevoir, known in Japan as サーナイト (Sirknight) is a Psychic/Fairy-type Pokémon and is native to Hoenn. It evolves from Kirlia and is one of the final evolutions of Ralts. Its male counterpart is Gallade.

It can turn into Mega Gardevoir through Mega Evolution, and the required Mega Stone is known as Gardevoirite.

Gardevoir is a white bipedal Pokémon with a lower body resembling a slim gown with a green underside. It has long, slender, white legs underneath the gown, and green hair that curls down the sides of its head. There are spikes on the side of its face, resembling a masquerade mask. It has green arms and long, slender fingers that resemble gloves. A red fin-like horn extends from its chest, and a shorter, more rounded horn extends from the back. A band of green on its chest extends to the centermost horn and connects to its sleeve-like arms.

As Mega Gardevoir, it turns almost completely white; only its hair remains green. Its gown becomes longer and wider, resembling a bridal gown. The forearms are slightly thicker with a pointed extension above the elbow. Its facial spikes are larger and now curl upwards. In contrast, its hair is now shorter and more tightly curled. There are now two horns in the center of its chest, extending to either side. These horns are said to be a physical manifestation of this Pokémon's heart, and it is able to use tremendous psychic power now that it is open.

Gardevoir takes resemblance to a principal dancer. It also resembles a style of traditional Japanese dolls known as anesama ningyou. It also has shades of a guardian angel, due to its protective nature over its Trainer .

Sirknight may be taken to mean さあ、ナイト saa, naito ("come, knight") or may be a combination of sir and knight. 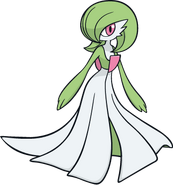 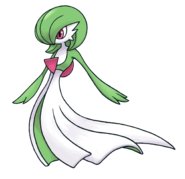 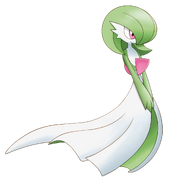 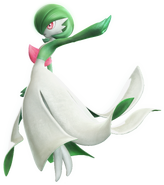 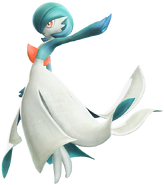 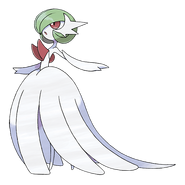 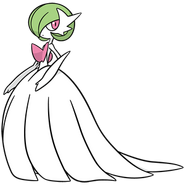