Garchomp are a dual Dragon/Ground-type Pokémon species that are considered pseudo-legendary Pokémon, due to their high statistics. Their heads heavily resemble hammerhead sharks. When a Garchomp folds up its body and extends its wings, it looks like a jet plane. Referring back to a jet plane, Garchomps can move at sonic speed, thanks to its wings and the fine scales that reduce dragging. This Pokémon is the final evolution of Gible and evolve from Gabite. They were introduced in Generation IV. They are dry common inteams as they are the pseudo legendaries of their generation.

Garchomp's Mega Evolution is known as Mega Garchomp, and Garchompite is its required Mega Stone.

Garchomp is a bipedal, draconian Pokémon that is primarily dark blue in color. It has red on its underbelly from the lower jaw to the middle of the abdomen, including the undersides of its arms. A patch of gold comes to a point below the red on its belly, and a golden star shape adorns the tip of its snout. Garchomp has horn-like appendages that resemble a jet or plane's engines, giving it an appearance similar to a hammerhead shark. These allow it to sense its prey from a long distance. Its large mouth features razor-sharp teeth. The feet have three white talons, and each arm has a single large, white claw for a hand. Curved fins sprout from the arms, creating wings that allow Garchomp to fly. It also has a large dorsal fin and another on its tail that resembles a shark tailfin. The male's dorsal fin has a notch on it. Pairs of small, white spikes protrude from its upper arms and legs, and there are gill-like slits on the sides of the neck. The eyes are intense, with black sclerae and gold-colored irises.

When Garchomp Mega Evolves, it grows in size and several of its features become more angular, including its head and shoulders. A row of five tooth-like spikes sprouts from each side of its abdomen, and red spikes grow from its knees. The claws and fins on its arms melt from the excessive Mega Evolution energy and morph together to form sharp, red blades. Because Garchomp takes great pride in its winglike fins, the sight of them melting into scythes sends it mad with rage. Its scythes can slice the ground to pieces, and Mega Garchomp viciously tears up its opponents with them.

Garchomp can fly at an incredible speed to catch its prey. It preys on bird Pokémon, and is known to eat entire flocks of them whole. It sometimes battles Salamence in the air as they compete for food. The fine scales on its body reduce drag for easier flight, and their sharp edges also serve to injure opponents who attack it directly. Garchomp is a cave-dweller and is seldom seen in the wild. 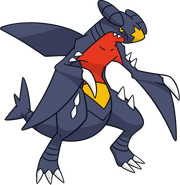 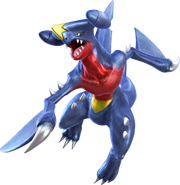 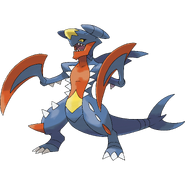 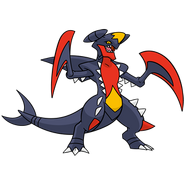