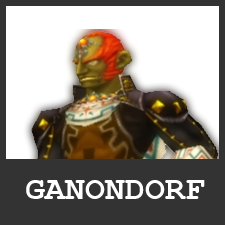 Introduced in The Legend of Zelda simply as a monstrous Prince of Darkness, Ganon's character has seen much development throughout the series, from being a simple monster to a powerful warlock with deeper motives to his actions.[3] As the manifestation of the Demon King Demise's hatred for the Goddess and her Chosen Hero,[4][5] Ganon is destined to eternally reincarnate to pursue world domination. As such, through the series, he has seen several deaths and resurrections.

Ganon is the possessor of the Triforce of Power, imbued with the essence of the Goddess Din. This divine relic makes Ganon unimaginably strong and grants him boundless mystical power, making him a grave threat to the land of Hyrule and the world. As stated in prophecy, the only one capable of defeating Ganon is the Hero who is chosen by the Goddesses.

Retrieved from "https://fantendo.fandom.com/wiki/Ganondorf_ZBR?oldid=3203946"
Community content is available under CC-BY-SA unless otherwise noted.