“Qār mīžaq! (You will die!)”
— Ganondorf, The Legend of Zelda: The Shadow King, just before the final battle

Unlike Link and Princess Zelda, who are incarnated generation after generation, only one "Ganondorf" exists throughout the history of Hyrule. This Ganondorf is brought back to life multiple times throughout the Zelda series.

Ganondorf is one of the only reoccurring villains in the Legend of Zelda series, and is considered to be one of gaming's greatest villains.

Ganondorf makes his debut in the Mario Singalong! Series in Mario Singalong Legends! where he kidnaps Princess Peach upon seeing her arrive in Hyrule he makes use of an ancient technology the Music Doors to hide her away.

The Legend of Zelda: Ghost Tracker

Ganondorf appears as a playable character in Stampede Breakfast 2. In both appearance and moveset, Ganondorf is based on his appearance in the Super Smash Bros. series. However, he is generally considered to be a bad character, so he takes inspiration from the Super Smash Bros. Brawl mod Brawl Minus for his moveset. Examples of changes include his Warlock Punch being able to deal 666% damage, him being able to use both Flame Choke and Gerudo Dragon, and Wizard's Foot burying opponents if used in midair. Fitting for wielder of the Triforce of Power, Ganondorf is able to dish out absurd amounts of damage in few attacks. He is also heavy, making him difficult to KO, but has slow speed and low recovery as a result.

Ganondorf makes another reappearance in the Super Smash Bros. series in Super Smash Bros. Calamity as an unlockable character once again. Ganondorf's moveset has been changed, with his Warlock Punch being his side smash, and Dead Man's Volley being his neutral special to replace it. Ganondorf's Flame Choke and Gerudo Dragon reappear and are combined in his side special, and he gains a new Final Smash, Triforce of Power, which increases his power by x1.5 and replaces his neutral special with a quick jab with the Triforce of Power. He also has new alternates, some based off of many other villains in the Legend of Zelda series, two based off of Link and Zelda, and two costumes that are a nod to his appearance in Legend of Zelda: Ocarina of Time, and his appearance in Hyrule Warriors.

Ganondorf is a playable character in Hyrule Heroes. He is a powerful fighter with immense strength, due to him wielding the Triforce of Power. His health is also hard to deplete due to him having strong guard and armor, but once his armor is worn out, he'll be like any other character. 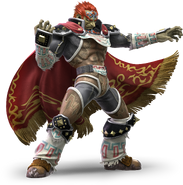 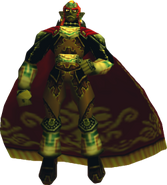 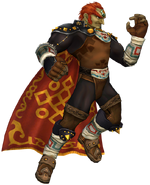 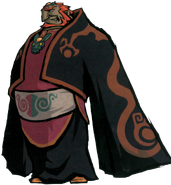 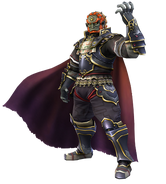 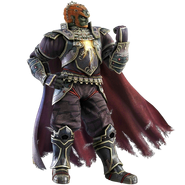 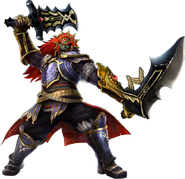 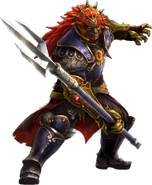 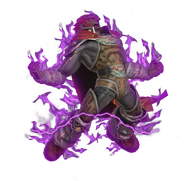 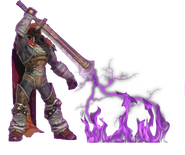 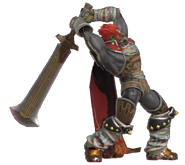 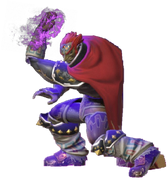