Start a Wiki
“Blast From The Past.”
— The Game Boy R's slogan.
The Game Boy Redux, more commonly referred to as the Game Boy R, is a nostalgia-based video game console released on November 14th, 2019. It is meant to serve as an ever-updating hub of classic games from the Game Boy, Game Boy Color, and Game Boy Advance line of systems. The console is meant to serve as a nostalgic reminder of Nintendo's past, while also providing consumers with a wide-range of classic Nintendo titles that are well-rounded balanced experiences.

The Game Boy R launched with twelve different titles overall, with the console itself being priced at $60. It came with three pre-installed games, the console, and a charger for the console. 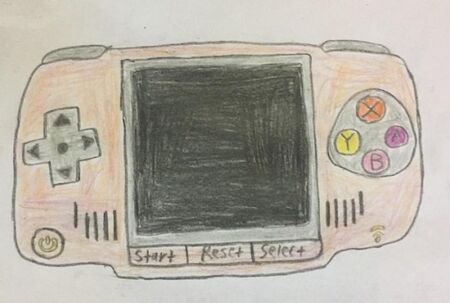 The Game Boy R's default design sports a nice color scheme consisting on a mix of orange and purple. The design closely resembles a regular Game Boy Advance, but has a few noticeable differences. For one, this is the first Game Boy console in history to use four buttons, with X and Y being used on certain games to improve the experience (example: X pulls up a map for you to look at in Metroid II: Return of Samus). The second new feature is wi-fi, which is used for downloading other games via the console's virtual shop, City Boy. Another change is that instead of using batteries, the GBR instead uses a UBS C charging cord, the same cord that the Nintendo Switch uses. Finally, there's the addition of a reset button, which works as a way to deactivate the system and reset the game without holding down the power button.

Besides that, there are a few minor changes, too. Select is used as the "home button" of the system, with it providing the ability to close the game currently being played and return to the menu. Instead of one speaker, there are now two of them, both providing quality sound. Other than that, everything else returns from older Game Boy iterations, including the headphone jack, the screen, the D-Pad, the A and B buttons, and the shoulder buttons.

City Boy is the Game Boy R's equivalent of the eShop on other Nintendo consoles. It's updated regularly with a selection of games, ranging from the well known to the obscure. The highest a game's price can be is $4.00, while certain games are absolutely free. You must be connected to wi-fi in order to access City Boy, which you can turn on or off on the home menu.

Retrieved from "https://fantendo.fandom.com/wiki/Game_Boy_R?oldid=3103452"
Community content is available under CC-BY-SA unless otherwise noted.