“Now you're playing with power. Portable power.”
— Advertisement slogan for the Game Boy.

The Game Boy is Nintendo's second handheld console, created during the fourth generation of video games. It was successful enough to not warrant a successor until the Game Boy Color in 1998. Its success led to it being well known by Nintendo fans and video game fans alike, becoming a highly-valued collector's item. Its codename was the Dot Matrix Game, referring to the dot matrix display it had for its games, contrasting the preceding Game & Watch's pre-printed LCD display.

With A and B buttons, a start button, a select button, and a directional pad, its controls were similar to that of a Nintendo Entertainment System. In 1995, a new version of the system was produced as part of Nintendo's "Play It Loud!" campaign, which was identical to the original Game Boy model, but came in a wide variety of colors such as red, blue, green, and transparent. Game Boy and Game Boy Color games would later become available on the Nintendo 3DS Virtual Console.

The Game Boy was created by Gunpei Yokoi, who also created the Game & Watch series and the Ultra-Hand toy. Although not as technically advanced as its competitor, the SEGA Game Gear, the Game Boy wildly outsold it, selling around 64.42 million units until it was discontinued in 2003, compared to the Game Gear's 11 million units. This made the Game Boy one of the most successful consoles of all time and solidified Nintendo's dominance in the portable gaming market.

The Game Boy was a small and compact handheld system that sported the same buttons as an NES controller: A and B buttons, a start button, a select button, and a directional pad. Compared to the NES, it had 8 kilobytes of RAM and contained a processor 2.345x faster than that of the NES. However, its screen was limited to grayscale, only showing four shades of gray or olive green depending on the model. A Game Boy required four AA batteries to be powered.

The Game Boy Pocket was the first Game Boy model made, released on July 21, 1996. As the name implies, it is a pocket-sized Game Boy with the same features as the original model, but had a longer battery life and a cleaner, more monochrome screen. It required two AAA batteries rather than four AA batteries. The first release of the Game Boy Pocket had no battery light indicator, but this feature was quickly added in a second model after consumer complaints. This second model also came in a variety of colors.

The Game Boy Light is the second revision of the Game Boy, and was released on April 14, 1998 exclusively in Japan, as Nintendo was more concerned about releasing the Game Boy Color to other regions. It was slightly bigger than the Game Boy Pocket and came in gold and silver colors. Its main feature, as the name implies, was a blue-tinted backlight that allowed players to play the system in low-light conditions. This was the only Game Boy system to have a proper backlight until the release of the Game Boy Advance SP.

The Game Link Cable is a long wire that allows two Game Boy systems to connect with each other. A few games took advantage of this feature, such as Super Mario Bros. Deluxe and the Game Boy release of Dr. Mario. There also exists a 4-player version, that as the name implies, can connect to four Game Boy consoles.

The Game Boy Camera is, as its name suggests, an accessory that turns the Game Boy into a monochrome digital camera. Released in 1998, the user could take up to 30 grainy monochrome pictures (although the number can be increased via third party devices), then view and edit them, and finally print them out using the Game Boy Printer.

The Printer allowed users to make prints of images on specially themed paper. It can connect to a Game Boy via the Game Link Cable. A select few other games make use of this accessory as well, notably the Generation II Pokémon games. Both accessories were discontinued in 2002.

Any page that has the Game Boy Games category on them will be added here automatically. 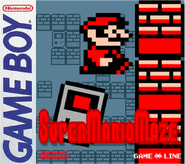