The Galoomba is a round, tougher, throwable type of Goomba that first appears in Super Mario World. After being stomped, a Galoomba flips over and can be carried. It resembles a chestnut.

Though Galoombas have always had a unique name in Japanese, English material named them Goombas prior to Super Mario 3D World, which finally recognized them as a distinct enemy type.

The Galoomba has also appeared in New Super Mario Sunshine as an enemy. This time you have to flip them over and stomp on to defeat. In some 3D games, they roll down steep hills towards Mario.

Galoombas reappeared in Goomsday Wii, apparently saved from extinction by the Scepter of Superiority. Once again, they were rolling down the hills to crush Waluigi.

In Super Mario Evolution they appeared as an enemy.

Their next appearence was in Paper Mario: Sticker Festival. They are the weakest enemies in the game and have many subspecies.

After that, they appeared as an early enemy in Kirby RPG and the Infinity Shard.

They reappear in New Super Mario Bros. V, alongside their winged and parachute counterparts. They act the same as they did in Super Mario World, albeit they can be stomped on again to defeat them.

Their latest appearance is in Paper Mario and the Elemental Sages. They appear as a generic enemy in Dimble Jungle.

Galoomba is a playable character in the Koopa Kart series as of Koopa Kart 64 except for Koopa Kart DS. He is a lightweight driver in every game he appears in. In Koopa Kart: Double Trouble!!, his partner is Goomba, and their Special Item is the Fireball. 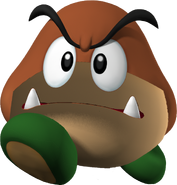 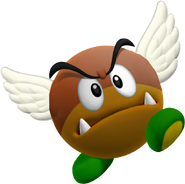 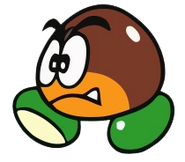 A Galoomba as it appears in Super Mario World. 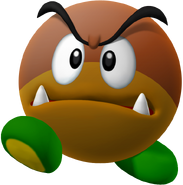 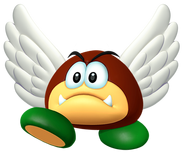 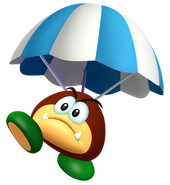 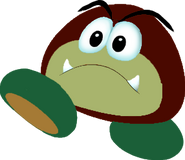