Galactian: Battle of Bracelets is a new game about the fight against spacial and temporal gods. That's also the begining of the series Battle of Bracelets. There are some characters (the "Golden Guardians" more often called Golden Bracelets) who try to balance the power of the gods. But this game "Aingeru the green angel" is the start of the adventure. It's a game for Wii, Wii U and Nintendo Prima and it was released in April of this year.

First steps across an unknown land

Aingeru is a intelligent boy who had a strange dream about a green angel. When he woke up he was wearing a bracelet with a green gem. It looks strange but he thought his mother has worn it to him. But one day a strange person appeared with a dark bracelet like his. Aingeru had the intuition that he had to use that when the other person revealed who was he, Drake. Aingeru touched his bracelet and he unleached the power of the bracelet. He had to fight against the dark bracelet but he can't control his power yet.

Then, a girl appeared and helped Aingeru. She is the blue bracelet and she's called Ainhoa. She explained him what is this magic. They are Golden Guardians. Afterwards a girl with other dark bracelet attacked Aingeru. She is called Inferna, the red dark bracelet. And she said that dark bracelets are known as "Chaos Guardians" (just by the ancient legends, they are usually called Dark Bracelets) and they must make wars against the gods. Now he is able to fight against her: It's your turn.

Inferna is a Lv. 2-Enemy that you must win. When you win, you give a letter from Forestia City. A Quest Bracelet is waiting for you, so you decide to go to Forestia City. When you arrive there are two bracelets in the Quest Palace. They are Pablo (Lv.4)and Xavier (Lv.3). They have the Forest Icon and they ask you a battle. You can decide who will be your rival. When you win you will be able to come into the Quest Palace. The quest bracelet is Lydia, a bracelet with a leaf style and Level 6. If you win she will give you the Forest Icon.

When you leave out of the palace you meet Elena. She needs help because a Dark Bracelet is attacking her. His name is Garone (Lv. 9) and you fight against him. When you win he gives you the Chaos Sword. You will be able to go to Candler City or Basic City. If you go to Candler City you must stop in Golondi Lake where Drake and another bracelet are looking for something when Drake see you. You will fight against him (Lv. 11). Now you will be able to go to Candler City and Misty City. Chandelia is the Quest Bracelet (Lv. 10) from the first city and Mistie (Lv. 13) is from the second. Rachel will need help if you go to Basic City. She needs to go across the Winder Forest where a lot of Dark Soldiers will attack you. When you arrive to Basic City you will fight against her (Lv. 8). You have to fight agaist Basilio (Lv. 12) and obtain the Base Icon.

Now, you can go to Waterness City, a city with a lot of waterfalls. When you have arrived you cannot find the Quest Palace because it's behind the giant fall. Akin is the Waterness Quest Bracelet (Lv. 15) and he will give you the Fall Icon. Now you have to go to Crystalia City. The quest Bracelet is Vitrie (Lv. 17) who will give you the Glass Icon. If you are in Misty Town you will go to Burghale City where Ainhoa will be waiting for you. She will fight against you (she is Lv. 16). Then, you will fight against Cistio (Lv. 17) to obtain the Mosquito Icon. Your trip will change at this moment.

From Crystalia City you can go Aurora City. Something strange is happening in the city, there are more than 10 Dark Soldiers and Inferna. They are looking for the Space Orb but they don't find it. At the entrance of the palace, a boy is waiting for you, he's Bruno and you have to fight him (Lv. 18). Your next quest is Aurora (Lv. 20) and she will give you the Aurora Icon. Then, you will go to Stonian City. Roko is the new Quest Bracelet (Lv. 24) and he will give you the Brick Icon. If you travel to Frontier City you must visit Frontier Palace where is Bianca (Lv. 45), the Frontier Quest Bracelet. Then you will go to Burghale City.

The new adventure starts in Burghale City. You have to fight against Ainhoa but she isn't the only one who will fight. You can play with Ainhoa. Mars Commander (Lv. 28) and Inferna(Lv. 22) are waiting for you, ONLY YOU against two powerful dark bracelets. If you win you will travel to Monacal Island. There is a village near the island's beach, Ballery Village. There is a tavern where Lisa is having lunch. Lisa is the Quest Bracelet of Terry City and she will invite you to fight in the Terry's Palace. But two Dark Soldiers are in the tavern and they attack you. You will fight against them. Then, you can go to Terry City. Fight against Lisa (Lv.30) and she will give you the Terra Icon. You have to stop in Monacal Ruins. This place has a strange energy and some Dark Bracelets are in the ruins. But they aren't alone, Pablo and Rachel are too. They need your help. You must fight against Alange (Lv. 31) and Garone (Lv. 33). Now you can play with Pablo. After fighting, they will go with an instrument. Now you can go to Indile Island.

When you arrive to Indile Island, Xavier and a girl called Bella are waiting for Pablo. As he hasn't arrived yet, Xavier (Lv. 35) wants to fight against you. After that you can fight for the Wing Icon in Airwing City against Alanie (Lv. 37). Then you have to go to Lagoon City and fight against Raïk (Lv. 40) for the Coral Icon. If you goes to the North, you will arrive to Waving Village. An old man tells you that something strange is happening in Whale Ruins. When you arrives to the ruins, Drake and Xavier are in the ruins. They were going to fight but you interruptes the combat. Now Drake (Lv. 42) wants to fight against you. If you win you will be able to play with Xavier. You have to go to Deserticien Island.

The journey across Legend Route makes that you arrive to Deserticien City. The city has a Quest Temple (the same function) and his manager is Tallie (Lv. 43) and he is a sand master. When you get the Sand Icon, a boy who is waiting to you. His name is Bianco and he's the white bracelet, he tell you that the Desertic Princess, Calastia, needs your help and he wants to fight with you (Lv. 42). Then, you have to go to Oasis Village where Bruno is waiting for you. He tells that some Dark Bracelets are in Oasis Ruins. When you go with Bruno to Oasis Ruins, Rachel appears with a special orb, the Space Orb. But other three Dark Bracelets comes behind Rachel. They are Alange (Lv. 45), Dalia (Lv. 40) and Jupiter Commander (Lv. 46).

Then, you can go to Metafin City and get the Finish Point Icon against Jan (Lv. 48). He is the only one who won't be able to play again if you don't defeat him. After that, you have to visit Crown City and visit the Deserticien Palace where Calastia is waiting for you. When you arrive to the palace, Calastia wants to fight against you (Lv. 50) if you win you will win the Royal Icon. Then you have to go to a temple out of the city. If you enter you will discover a city under the sand of the desert. There is a Hidden Temple where you can obtain the Santerranium Icon and fight against the Sand Beast: Sandorium.

After that, you have to go to Fragmentaria Island and Dominal City. You have to get the Sunday Icon against Dominite (Lv. 53). Then you have to cross the Fragmentaria Lake where you will see Inferna another time. She wants to fight against you (Lv. 52). Then, you will arrive to Fantire City. Xavier and Ainhoa are waiting for you because they have to tell you that the Sunday Battle Tournament will be soon in Boreal Mount. Then you can go to the Quest Palace and fight against Tando (Lv. 54) and get the Spirit Icon. After that, a boy is waiting for you. He's Chatelion, the Cat Bracelet and he wants to fight against you (Lv. 56). Then you have to visit Holiday Coast where there is a Quest Hotel. There are 3 Quest Bracelets that you can fight if you want: Christa (Lv. 57), Darren (Lv. 57) and Nico (Lv. 57).

The End of the Route

The next place you will go is Thunderstone Island. There are two cities in there: Fulguric City and Piritic City. The first city is the nearest and there is a Quest Palace where Frigine (Lv. 55) will fight against you to get the Fuse Icon. Then, the other city has the other Quest Palace where Limesty (Lv. 56) will give you the Limestone Icon if you win. Before going out of the city; Alange (Lv. 57), Inferna (Lv. 57) and Shion (Lv. 58) wants to fight against you but Ainhoa (Lv. 59) and Pablo (Lv. 56).

The next island is Guide Island. It's a very little island with a big city, Sunshine City. It's the last island you can visit. There are a Quest Palace where you can get the Redsun Icon. The opponent is Sol (Lv. 60). Then, you have to go to the port of the city. Another dark bracelet is there: Lance (Lv. 59). He wants to fight you, then, when you win you get a letter from other Dark Bracelet. He will be waiting for you after the Sunday Fighting Tournament. It's the time to travel to the next place: Galactian Land.

You will arrive to Galactian Land. The city is Nocturnus Ville. The Quest Palace is near the coast and the boss of this palace is Nactio (Lv. 61) and he will give you the Redmoon Icon, if you win. Inferna is waiting for you at the exit of the Quest Palace and she wants to fight you (Lv. 60). After that, you can choose the order of the last icons:

At the north of Fightith City is Boreal Mount. Where the Sunday Fight Tournament is going to happen. Go there. In the tournament, you will find some Golden Bracelets, some Dark Bracelets, and others. You have to win the SFT. If you win you will get a lot of new abilities and another weapon. After that, continue going up until you find Drake (Lv. 70) and he wants to bet the bracelet. When you win, he will give you the Dark Green Bracelet... Ainhoa and Pablo will arrive to the room where Drake and you were, but they will find something... THE END...

A style is a type of energy which has each attack and ever bracelet. There are 20 styles of energy: 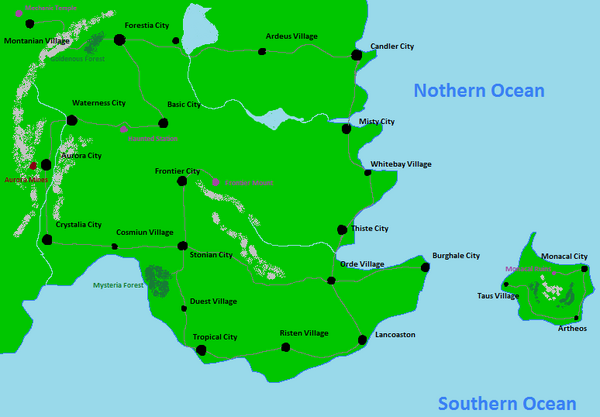 Map of Melia Land
Add a photo to this gallery
Retrieved from "https://fantendo.fandom.com/wiki/Galactian:_Battle_of_Bracelets?oldid=2613993"
Community content is available under CC-BY-SA unless otherwise noted.