“This legend was sealed away long ago because of his power. He defies time to challenge you!”
— Galacta Knight's pause screen description in Kirby Super Star Ultra

Galacta Knight, also known as the Aeon Hero, is a recurring character in the Kirby series, making his debut in Kirby Super Star Ultra. He is said to be the greatest warrior in the galaxy, sealed away in fear of his power. He bears a resemblance to Meta Knight, but with some very obvious differences. Most notably, he wields a shield and lance, rather than a sword.

In the Meta Knightmare Ultra sub-game of Kirby Super Star Ultra, Meta Knight makes a wish to Galactic Nova to fight the greatest warrior in the galaxy. As such, Galacta Knight is summoned, and the two have an intense duel. Eventually, Meta Knight reigns victorious, though this would not be the last seen of him. Galacta Knight would later appear in future Kirby games such as Kirby's Return to Dream Land or Kirby: Planet Robobot, often as a hidden boss, and one of the strongest at that.

Galacta Knight first appears in Kirby Super Star Ultra. He is the final boss of the Meta Knightmare Ultra sub-game, which follows Meta Knight's quest to be the ultimate warrior. To do so, he makes a wish to Galactic Nova to become stronger by fighting the greatest warrior in the galaxy. This wish is granted, and Galacta Knight is summoned from his crystalized prison to have the two duel each other.

Galacta Knight's attacks are all variants of Meta Knight's abilities in his boss fight in the Revenge of Meta Knight sub-game. He is able to summon alternate colored versions of the Meta-Knights to help him in battle, as well as use a variety of slashes with his lance, flight, teleportation, and creating mach tornadoes. As he gets damaged, he will attack faster to the point of attacking non-stop, making him much more difficult to defeat.

After a long duel, Meta Knight defeats Galacta Knight, who starts flickering white as he flies away. His wings are torn off and his lance and shield are taken away as he is engulfed in light, and disappears. Galacta Knight is also battled by Kirby in The True Arena, and is always the second to last boss battled, preceding Marx Soul.

In Kirby's Return to Dream Land, Galacta Knight only makes an appearance during the The True Arena, where he is one of the final five opponents. Specifically, he is always the third to last battle. He is battled in a crystalline arena in Halcandra.

Galacta Knight once again uses a lot of the same moves as Meta Knight, each with his own twist. He can fly around, strike multiple times with his lance, and create beams by swinging the lance. When he loses half of his health, he can use more attacks from Kirby Super Star Ultra, including creating mach tornadoes. Once defeated, the player fights Magolor EX.

Galacta Knight's appearance in Kirby: Planet Robobot is near identical to his appearance in Kirby Super Star Ultra. In the Meta Knightmare Returns sub-game, Meta Knight once again wishes to face him to improve his swordsmanship, this time to Star Dream. It obliges despite the warnings of his power being capable of destroying a planet or two, and it proves to be Star Dream's undoing, as Galacta Knight slashes at it with his lance after he is summoned. This damages the computer and causes it to plummet to the ground, the battle commencing soon after. He is called Galacta Knight Returns in this battle.

In addition to the attacks he used in his previous battles, Galacta Knight has some new moves as well. He is able to open up a dimensional rift and fire a massive laser beam out of it to deal heavy damage. He can also shoot beams from his lance at multiple elevations. Like his encounter in Kirby's Return to Dream Land, the battle has two phases, with him getting stronger once his health is depleted by half.

Once defeated, Galacta Knight is trapped within a crystal prison, proving Meta Knight victorious. Once more, Galacta Knight can be battled in The True Arena, and is always the second to last boss battled.

Galacta Knight makes a minor appearance in Kirby Star Allies, specifically at the end of the Guest Star ???? Star Allies Go! sub-game. After defeating Hyness, Galacat Knight emerges from the dimensional rift he opened. He initially appears to be the secret final boss, but before the battle can start, a red butterfly lands on his hand. This butterfly then absorbs Galacta Knight's power and the two merge, turning him into Morpho Knight, who is the true final boss of the sub-game.

Galacta Knight appears as a Trophy in Super Smash Bros. for Wii U, which is awarded after completing all unlock conditions for the solo Event Matches.

Galacta Knight appears in Super Smash Bros. Ultimate as a Legendary-class (★★★★) Spirit. Unlike many other Spirits, the Galacta Knight Spirit has no Spirit battle attached to it. The only way to obtain it is to summon the cores of Shovel Knight, Knight Man, and the Meta-Knights. He is a Defense-type Spirit, and as such greatly increases defense when equipped. Galacta Knight also increases the attack power of sword attacks. He is listed as number 354 in the order.

Meta Knight also has an alternate costume inspired by Galacta Knight's coloration. Additionally, his mask as a vertical slit down the middle, much like Galacta Knight's.

Galacta Knight greatly resembles Meta Knight, but has some key differences. He has a pink body and wears a white mask that conceals his face. This mask has a slit where his eyes are visible, which glow pink like his body. There is also a vertical slit on his mask in between his eyes. On top of his mask are two yellow horns that extend backward. He also wears white gloves, sabatons, and shoulderpads.

Galacta Knight lacks a cape, and unlike Meta Knight, his wings are always visible. They are blue and feathered, resembling bird's wings in contrast to Meta Knight's bat-like wings. Rather than a sword, Galacta Knight wields a lance, which has a pink blade, blue hilt, and white handle. He also has a shield, which is white with pink markings, and also has a yellow star on it.

Galacta Knight's personality is generally mysterious. While he does seem to share Meta Knight's code of honor and is a skilled warrior in his own right, he is not benevolent, and will not hesitate to battle anyone who challenges him when he is summoned. It is implied he is violent and dangerous, as he was sealed long ago in ancient times out of fear for his power being too great. This is shown in Kirby: Planet Robobot, where he slashes at Star Dream after he is summoned, damaging it.

Galacta knight will appear in Kirby: Popstar and Beyond as part of a dual secret boss alongside Dark Meta Knight. 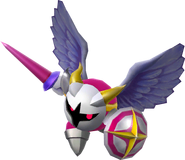 Galacta Knight in Super Smash Bros. for Wii U. 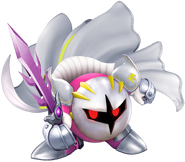 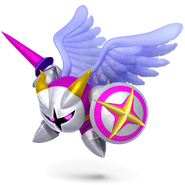 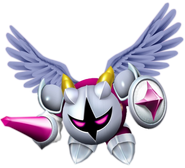 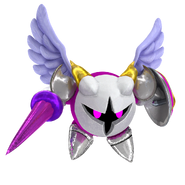 Galacta Knight by Fruib_
Add a photo to this gallery
Retrieved from "https://fantendo.fandom.com/wiki/Galacta_Knight?oldid=3309580"
Community content is available under CC-BY-SA unless otherwise noted.