GD Gaming Studios (or simply GD Gaming as displayed in some games created by the company) was a relatively small video game company created by GamingDylan. The new company focused on creating original titles for their line of systems, but also frequently worked with Nintendo on consoles. The official mascot of the company was Danny, the main protagonist of their flagship series, Danny's Adventure.

After 3 years of operation, GD Gaming Studios was shut down on January 14th, 2017. Most games in production at the time were cancelled, although a few projects were handed off to other companies.

GD Port was the first device created by GD Gaming. It is a portable console, as the name implies. However, it is more similar to the Game Boy of Nintendo rather than newer portable devices such as the Nintendo 3DS because it does not fold. However, it remains at pocket size for easy keeping. The launch title for the GD Port was Danny's Adventure. The system was released in April of 2015.

The logo is made by Lumogo.

The second device created by GD Gaming, GD Realm was meant to be the main console but was pushed back due to development progress. Unlike the GD Port, this is a home console rather than a portable one. It is confirmed that one can use the GD Port as an alternate controller for the GD Realm, but only for certain games where the controls on the GD Port will work. 2 Realm Controllers often come packaged with a GD Realm as it supports multiplayer and online play. The concept for the name "GD Realm" comes from the fact that online play with many people from different places creates a "realm" of players. The launch title for the GD Realm was supposed to be Penta, and it was originally scheduled for a 2016 release before being delayed and cancelled.

The logo is also made by Lumogo.

On July 7th, 2014, it was revealed that the company was co-producing a new home console for Nintendo as a successor to the Wii U, known as the Nintendo Hypercube, also known as the Tesseract or Project UNION, and that it would be released soon, with many of its exclusive games coming out for this system. In the 2014 Holiday Showcase, it was confirmed that a new version of the GamePad, known as the HyperPad, would be included with the system. The console was scheduled for a 2017 release, with a launch title of Super Smash Bros. Crusade, before its cancellation.

Logo also also made by Lumogo.

GD Festivals are miniature events held by GD Gaming Studios, often before or during a showcase. Often times when time constraints get in the way, GD Gaming will release info of their games in waves during the festival rather than using a Showcase.

The first Festival took place in August and featured the following games:

The second Festival took place during the Fantendo Spooky Scary Showcase of 2015, and covered the following games:

In addition, it was planned to cover a "Pokémon-related surprise", but the announcement was pushed back. The third Festival occured during the Fantendo Holiday Showcase 2015, with a theme of "Peace and War". It revealed the following items:

The fourth and final GD Festiva took place alongside the Fantendo 9th Anniversary Showcase. As opposed to doing a larger preview of their event like before, the company decided to only unveil what they will be presenting through text in order to focus their efforts on getting games ready for the showcase. The following games were revealed:

The name "GD Festival" is an homage to a now cancelled game that shared the same title.

The template for a Nintendo Hypercube game.

The template for a GD Port game. 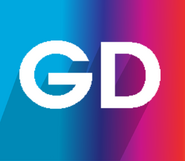 Alternate logo for the company.
Add a photo to this gallery

Retrieved from "https://fantendo.fandom.com/wiki/GD_Gaming_Studios?oldid=2282778"
Community content is available under CC-BY-SA unless otherwise noted.