Fwoosh is a cloud with bushy eyebrows in the Super Mario Series, that first appear in Super Mario 64. In 2D games, they blow away Mario and co. like the wind in NSMBW's 2-4.Their leader is Giga-Fwoosh.

Fwoosh makes an appearance in the game, Mario & Luigi: Rivals in Adventure. In the Gritzy Valley stage, Mario, Luigi, and Chip were going to ride the clouds to reach the pyramid. But Fwoosh swooped in and told them that too many things have been already happening. They can't risk anymore visitors. When the Wario Bros. reach the Mario Bros., they convince Fwoosh to let them pass. 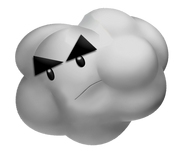