Fuzzies (singular: Fuzzy) are enemies of the Mario series who first appear in the Mario game Super Mario World. They are speculated as pests in the Mario universe, and some are capable of speech. Fuzzies used to be mostly limited to the Paper Mario series, but have since made appearances in newer main-series Mario games.

Fuzzies usually hop from one area to another and absorb health from the player by biting them. More intelligent Fuzzies, which appear in the Paper Mario series, are usually thieves, stealing Shells from Koopas.

Fuzzies appear in Super Mario World 3D as enemies. They function mostly the same as in past games, but their behavior more closely resembles their appearances in Super Mario Galaxy 2 and Super Mario 3D Land. Gold Fuzzies from the Paper Mario series make their first 3D debut in this game, behaving the same as normal Fuzzies, but faster and usually chasing the player.

Fuzzies appear in Super Mario Sunshine Deluxe, replacing the generic red and blue "Wire Trap" enemies from the original. Naturally, they appear wherever the Wire Traps appeared, such as in Bianco Hills's first Red Coin mission and Noki Bay's secret level. Whereas the Wire Traps burned Mario if he hit them, Fuzzies don't. 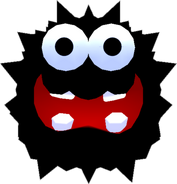 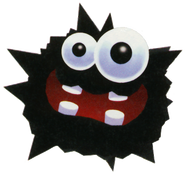