Funky Kong is a Kong, and character in the Donkey Kong series of games. He first appeared in Donkey Kong Country. He is a surfer, and usually helps out Donkey Kong and his pals by providing different modes of transportation.

In Donkey Kong Continent, Funky opens up an airport called Funk-E Airlines. This small business is located on an island in front of Donkey Kong Island, and the Kongs can pay two Banana Coins to use his plane. His plane flies to Krocodile Isle, the Northern Kremisphere, and Beat Island. However, if it is the first time the Kong is going to that place, the flight is free.

Funky is also one of the default playable Kongs in Classic Battle and Air Battle in Multiplayer Mode.

Although not playable, Funky does make three appearances in The Original Donkey Kong as a kid. He first appears in Donkey Kong Jr.'s first level, Rickety Race, where DK Jr. races Funky in his plane. Next, Funky is the second boss that DK must battle, because Funky thinks that DK is attacking Donkey Kong Jr. His attacks include swooping down and firing Kongo Bills. Finally, Funky appears in the audience of the last boss fight.

Funky Kong appears as a secret character in the Wii boxing game Donkey Kong Knockout. He is similar to Donkey Kong but he is stronger and slower. His special move is to throw wrenches and various objects at opponents in a reference to his mechanical Donkey Kong Country appearances. He is unlocked by finishing the game with Donkey Kong on Hard difficulty.

Funky Kong appears as a playable character in the multiplayer Wii racing game Donkey Kong Racing. He appears as part of the Kong category.

Funky appears as a unlockable character in Donkey Kong 4. He is avaible in the Banana Beach world.

Funky Kong is a player on the Donkey Kong Wilds team on the multiplayer Wii sports game Mario Rugby League. He is a strong and skillful character with poor speed. His special skill is to shoot people with an orange grenade launcher as an extended tackle.

He finds a letter with Diddy Kong, suddenly, he finds out that Donkey Kong is captured. So, even though he loathes adventuring, himself, Diddy, Dixie Kong and Tiny Kong go on a quest to find DK from the Kremlings and King K. Rool.

After making his debut in Mario Kart Wii, Funky Kong returns as a heavyweight character in Mario Kart Delta 4 years later after skipping Mario Kart 7. His kart is the, and this time has has no courses or stages.

Funky Kong appears in both Koopa Kart 7 and Koopa Kart 8 as a heavyweight driver due to his popularity in Mario Kart Wii. In the former game, he is an unlockable character and can be unlocked by winning the 150cc Buzzy Beetle Shell Cup. In the latter game, he is a default racer.

He is the fastest racer in both games, but also has the worst handling among all racers in the game. 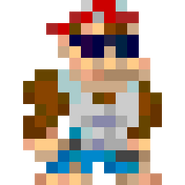 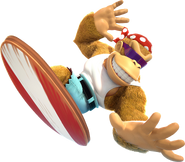