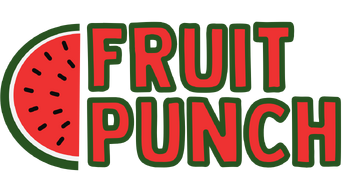 Fruit Punch is a puzzle-platform adventure game for the Nymbus, released as a launch title alongside the console in November 2018. It was first unveiled in a Button Studios Direct on August 1st 2018, although details about the game didn't surface until September of that year. The game follows the playable main protagonist, Punch, as he goes on a quest through Vegetable Ridge to save his sister, Cordia, after she is kidnapped from their home by Dr. Vegtebloid. Fruit Punch is unique in that it is the first original title developed for the Nymbus as well as being the first original IP released by Button Studios.

As the name implies, the world of Fruit Punch is filled with fruit and vegetable creatures, with almost all of the main characters, enemies and antagonists being based on fruits, vegetables or plants. Even the collectible items found in every level are fruits. The game is targetted towards a children's demographic, hence the colorful graphics and bubbly personalities of the characters. However, the game's later puzzles can prove to be a real challenge, with precise timing, problem solving and reactions needed to complete the game to its entirety.

The game's success allowed it to receive a sequel, Fruit Punch: Sugar Rush, which was released in 2020.

In addition to the main adventure mode, Fruit Punch is jam-packed with alternative game modes for both single player and multiplayer. These game modes are available under the 'Fun & Games' section on the title screen.

“In a fruity new adventure, Punch sets out into the colorful world of Vegetable Ridge on a quest to rescue his sister, Cordia, from the clutches of the evil Dr. Vegtebloid and his mutant vegetable army! With help from some friends, Punch goes to save his sister, using newly learned powers along the way!”
— The game's blurb.
Punch and Cordia are in their home in Fruit Forest, a woodland on top of a cliff, about to feast on some cake. However, the two notice the ground shaking, and dust and debris begin to fall from the ceiling as a giant mechanical arm breaks through the roof into the room, grabbing Cordia before getting away. Punch goes outside to see a huge robot being piloted by Dr. Vegtebloid, who throws Cordia into a cage. Punch chases after Vegtebloid's robot, only to be spotted while climbing up the robot's back. The mechanical arm picks up Punch, throwing him over the edge of the cliff into the forest below. Vegtebloid laughs as Punch falls, and he heads off to his castle, with Cordia imprisoned in the robot.

Punch is woken up by a little bird by the name of Kiwi, who tells him that Dr. Vegtebloid got away, and is headed for his laboratory on the other side of Vegetable Ridge. Kiwi talks the player through the game basics in a short tutorial level, before they split up from each other. The player can now access the world map and the levels within Fruit Forest. To advance through the forest, Punch must find 8 Golden Seeds in each level. At the end of the world, he must face a boss.

After navigating through five worlds, Punch makes it to Dr. Vegtebloid's Lab, where he must stealthily infiltrate the castle. Eventually, he reaches the prison, where Cordia has been imprisoned. He frees her, but shortly after, Dr. Vegtebloid's security cameras notice him. Vegtebloid enters the room and the roof opens up. He climbs into his robot to duel against Punch, who must use all of his skills to defeat Vegtebloid. With Cordia's help, Vegtebloid is defeated. His robot explodes, launching the evil scientist into space, never to be seen again. Punch and Cordia rejoice together as the game ends.

Fruit Punch is a 2D platforming game with puzzle elements, which functions similarly to games such as New Super Mario Bros. during levels. All levels are filled with Seeds, which are the game's low-value currency, used to purchase hints, items and more.

In Fruit Punch, there is less of a focus on platforming and more of a focus on solving puzzles, and using the surrounding environment and elements within it to reveal the locations of Golden Seeds and help him reach them. Eight of these Golden Seeds are present in every level, and Punch cannot progress to the next level until they are all found. Similarly, Sparkleberries can be found in every level. Unlike Golden Seeds, however, Sparkleberries are not compulsory to obtain and are instead optional, usually being in much harder-to-find locations than Golden Seeds. With the Sparkleberries that they collect, the player can access hidden levels and shortcuts through the world.

Punch has a small array of stats that are visible at all times, which are Juice, Health, Air, Combo.

Throughout levels, the player can find many contraptions that can either help or hinder their progess in collecting Golden Seeds. An example is the Cocannon, which, when Punch hops into it, fires him out, allowing him to smash through walls with the velocity he gains.

Something else that Punch will encounter in levels is enemies, which appear in almost every level. Enemies have their own health, which is visible when they are nearby, and to defeat an enemy, Punch must deplete its HP by jumping on it, or using an ability. However, some foes have special means of being defeated such as the Melonmouth, which can only be defeated by crushing it with a Cocoboulder. At the end of some levels, Punch must face a boss enemy. Most bosses in Fruit Punch are larger, tougher variations of regular enemies, which are defeated by using a combination of certain abilities to expose a weak point. The solutions to defeating bosses may not be obvious at first, so it is wise to use different abilities on the foe to see their effects.

The world map is split between 6 Zones, which the player can travels through in a set order. Each zone is made up of 8-16 levels, with several more bonus levels and challenge levels intertwined with the main levels. In order to progress to the next level, Punch needs to collect 8 Golden Seeds from the current level. The non-mandatory bonus levels and challenge levels are accessed by collecting and spending Sparkleberries that are found in the regular levels. These levels also contain Golden Seeds and Sparkleberries, which can be used to unlock other levels in other zones.

Furthermore, Punch can find several buildings across the world where he will receive help from a friend, such as;

The main playable character, Punch, has 8 different abilities which are unlocked at different points throughout the game. These abilities are essential to solving puzzles and finding Golden Seeds, and some enemies can only be defeated by using an ability on them. Punch starts the game with only the Seed Popper ability available, but more are unlocked in levels.

Enemies play a large role in the levels of Fruit Punch. For the most part, they exist to hinder Punch as he tries to solve puzzles and find Golden Seeds. However, some enemies have exclusive abilities and the player needs to utilise their skills in order to collect all of the seeds.

There are 21 unique enemies in the game.

Bosses are Punch's main adversaries throughout the game and exist as powerful foes guarding the path to the next world. They are all fought in their own, self-contained boss levels that are found at the end of a world and usually begin and end with a cutscene. All of them possess a Golden Seed, which is required to advance through the area.

Fruit Punch takes place entirely within Vegetable Ridge, a country on a plateau on an unknown planet. While playing through the game, the player will go through 6 different worlds, all of which have levels within. Each world has a different theme, which dictates the style of the puzzles, enemies and aesthetics in the levels.

Badges are a special type of equippable item in Fruit Punch. In the main menu, the player can equip up to four Badges to Punch, and by equipping one, the effects listed in the Badge's description are applied. Badge effects can stack, so if the player has two badges that increase movement speed by 10%, the overall boost will be 20%.

Badges are obtained in three ways;

Fruit Punch has seen several updates following its release in November 2018. Button Studios have stated that they wish to continue to update the game for many more months, regularly adding content to keep players entertained.

(Released on November 18th 2018)
On launch day, a patch was added which added several bug fixes, including a game-breaking one in which Punch could become stuck between two mechanisms on the fourth level of Parsnip Peak.

(Released on November 28th 2018)
Following the release of Smash Galaxy: Star Bright, Star Fight, an update was released for Fruit Punch which included some crossover content from that game.

Dr. Vegtebloid inside his robotic contraption, The Blender.