Start a Wiki
“Hey! After burning, I have to freeze?!! Aaah! What’s going on with this game?! Is this some kind of cruel experiment? Anyone else would’ve given up by now!!”
— Wario, Wario Land 4
Frozen Wario (also known as Ice Skatin' Wario in Wario Land 3)is one of Wario's Reactions in the Wario Land series. It was introduced in Wario Land II and reappeared in Wario Land 3 and Wario Land 4. It also made a return in Wario Land: Shake It!

When Wario is hit by the breath of Yukimaru, Brrr Bear, or Yeti, Wario becomes frozen solid. He will then skid backwards until he hits a wall. He can slide through spikes and other obstacles in this form but the player has no control over him. In later games, this power-up has no purpose except to annoy the player or waste time.

This form takes on a new appearance in Wario Land: Hunt For The Ring, with Wario appearing blue with icicles hanging off him. The form acts identical to past appearances. 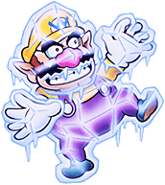 Frozen Wario in Wario Land: Hunt For The Ring
Add a photo to this gallery
Retrieved from "https://fantendo.fandom.com/wiki/Frozen_Wario?oldid=3217658"
Community content is available under CC-BY-SA unless otherwise noted.