Frosty Mario is other of many Mario's Power-Ups, first appearing in Super Mario Land 3D. Mario can obtain this Power-Up with a Frosty Flower.

Frosty Mario has many attacks. He can throw iceballs at enemies to freeze them, can roll with a grand iceball and crush foes, can do an Ice Spin to freeze nearby enemies and can walk or skate on water, and also, he can walk normally on ice without slipping. He also can defeat fire enemies such as Podoboos, Fire Snakes and other enemies. He will turn into Mario again like other power-ups, being hit by an enemy or object, fall on lava, etc.

The first appearance of Frosty Mario is in Super Mario Land 3D. The power-up needed first appears in World 5, in the level 5-2, where Mario must use it to skate on water and complete the level. Frosty Mario can be used in other worlds and levels, but mainly in World 5. It is necessary to defeat the boss of World 5, ColdStar. Being Frosty Mario, he must roll with the grand iceball and knock off ColdStar of the platform 3 times to defeat him.

Frosty Mario appears as a rare power-up in the game, where Mario can walk on water by making ice platforms, roll into a giant snowball, and throw huge iceballs. He has a different appearance in this game, with reversed colors of Ice Mario, and frost coming from Mario's cap. It first appears in World 3-3, where Mario uses it to speed through the course. 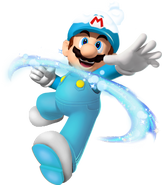 New Super Mario Bros. Galaxy
By SuperMarioBro64 (t∣b∣c)
Add a photo to this gallery
Retrieved from "https://fantendo.fandom.com/wiki/Frosty_Mario?oldid=2381516"
Community content is available under CC-BY-SA unless otherwise noted.