Frogadier is a dark blue frog-like Pokémon with a light blue underside. Its eyes have yellow sclera, and it has a white bubble scarf. It has dark blue hands and toes, and white circular fingers. Frogadier is a nimble and swift Pokémon; it can scale a tower exceeding 2,000 feet in one minute, and it can throw bubble-coated pebbles at targets up to 100 feet away. It can confound opponents by leaping about ceilings or into trees. 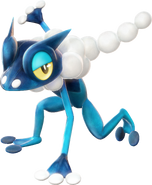 Frogadier is based on a frog, and considering its crouched pose, dark blue "hooded" face and upper body, as well as its scarf-like foam, Frogadier is more than likely based on a ninja. The spiked protrusions above its eyes may have been inspired by horned frogs from the genera Megophrys and Ceratophrys. Its bubbling white foam is a reference to frog foam nests, created by some species such as the túngara frog and grey foam-nest tree frog to protect eggs. It was shown in the anime to be able to run on the surface of water, much like the common basilisk.

Frogadier may be a combination frog and brigadier or grenadier.