He forcefully stuffs any human he encounters after-hours into a Freddy Fazbear suit, as do the other animatronics, resulting in said person's death. This is due to an engineering fault that causes the animatronics to think that anything moving after-hours is an endoskeleton that left it's suit.

Freddy is an endoskeleton wearing a costume that gives him the appearance of a brown bear. Onstage, he wears a black top hat and bow tie, while holding a microphone in his right paw. His ears are articulated and are thus able to move back and forth.

Unlike the other animatronics, the only features of Freddy that can be seen on the cameras are his endoskeleton eyes and some of his poorly-illuminated body parts and accessories.

He has human handprints on his face, though they are very difficult to spot. His irises are normally of a light blue color, but he is commonly seen with his endoskeleton eyes on-camera.

Throughout the series, Freddy is often one of the last animatronics to activate throughout the week. In the first Five Night's at Freddy's, Freddy tended to stay within the shadows of each room as he sneakily made his way to The Office. To slow Freddy down, the player would have to keep an eye on the cameras.

In Five Night's at Freddy's 2, Freddy acted much similar to other animatronics as opposed to the first installment. Freddy would make his way to The Office, not hiding in the shadows and could be fazed away with the mask.

In the third installment, Freddy's phantom version will appear walking by the window to the office, and will jumpscare the player if they continue looking directly at him. 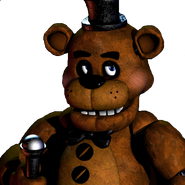 Freddy Fazbear from the original game 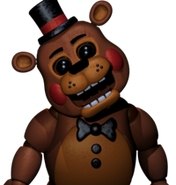 Toy Freddy from the second installment 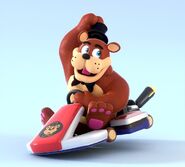 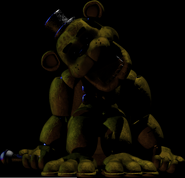 Golden Freddy from the first Five Nights at Freddy's 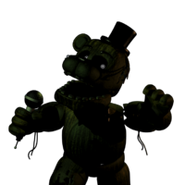 Add a photo to this gallery
Retrieved from "https://fantendo.fandom.com/wiki/Freddy_Fazbear?oldid=3236899"
Community content is available under CC-BY-SA unless otherwise noted.