Start a Wiki
“Wha-What do I... Oh man... A REAL girl in my room! This is so hi-technicaaaal!”
— Francis, in Super Paper Mario


Francis is one of the bosses of Super Paper Mario, encountered in the Bitlands. He is a video game-obsessed chameleon who steals Tippi from Mario and Peach when they first arrive, taking her to his home, Fort Francis, to take pictures of her and brag to his online friends on Digibutter.nerr, a forum for butterfly obsessives. He calls Tippi "Francine", and calls her this throughout the game. Eventually, the heroes defeated Francis, rescued Tippi, and obtained the fourth Pure Heart.

Francis has a large, bulky green body with a tail that curls upward like regular chameleons. He has orange lips and a long tongue, and wears square glasses with swirls in them, similar to Professor E. Gadd and Fawful. He wears a black fanny pack and a yellow shirt with Super Mushroom and Star patterns on it. As Mario, Peach, and Bowser explore Fort Francis, it is shown that he is a video game addict, having merchandise of various games, including references to Paper Mario and Paper Mario: The Thousand-Year Door. He also has an army of robotic cat-like creatures called Meows that are in charge of keeping the fortress clean and doing his chores.

Francis makes his debut in Super Paper Mario. When Mario and Peach first arrive in the Bitlands in search of the next Pure Heart, Francis surprises them by using his tongue to grab Tippi. He then runs off to Fort Francis, with the two heroes chasing them. During this time, they would recruit Bowser.

The next time Francis is seen is when the heroes reach Fort Francis. He is locked in a room behind a large door, which will only grant access to "hot babes" (meaning Peach) that answer several questions regarding video games and other media correctly (humorously, every answer is "Yes").

.When she opens the door to confront Francis, he starts freaking out that a "hot babe" is in front of him, and is too shy to talk to her directly. Instead, he pulls up his laptop and activates "Swoon.exe", a dating simulation, where he talks about his interests. Peach ends up getting upset and uses Boomer to blow up his laptop. As revenge, he tries to battle the heroes.

Francis has 40 HP and spends most of the battle moving around the room invisible, where he can't be hit. He will reappear, which is the heroes chance to attack, but they must be quick before he himself attacks and turns invisible again. Using Mario, he can flip into 3D and see Francis' shadow, making it easier to strike him. Francis has several attacks, ranging from grabbing the heroes with his tongue before spitting them out, to using his laptop to summon Meowbombs, which will explode if not defeated quick enough. He can also pull out his camera and flash it, causing the screen to turn white and disorient the heroes' vision for a short time. Once defeated, Francis runs away, letting Tippi free.

When the heroes reach Castle Bleck, they encounter Merlee (who is actually Mimi in disguise), who wants them to answer questions about their biggest fears. Humorously, one of the answers is "Francis", and selecting him will cause him to appear in the third following room as an optional boss. He was apparently watching his favorite TV shows before being warped to the castle, though he wanted Tippi back so much that he convinced himself that his Reclinatron 4500 had been manipulating his dreams, causing him to warp here. He battles the heroes again to reclaim Tippi for himself. His battle is the same as the one in Fort Francis, except his attacks deal more damage. After being defeated once more, he runs away, saying that he would simulate the battle on his computer to find out what he did wrong.

Once the game is beaten, Francis can be found in the same room he held Tippi hostage in Fort Francis, and shows the heroes his latest creation: Tiptron, a robotic clone of Tippi. Because he was saving up to buy Starship X-Naut Issue One, he offers to sell Tiptron for 999 Coins. After purchasing it, Tiptron joins the heroes. Francis then says he plans on making Tiptron Mk. II.

Merchandise that References the Mario Series

Francis has several pieces of merchandise for various media in Fort Francis, many of which are references to the Mario series. The following is a list of the various references: 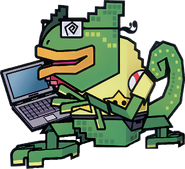 Francis in Super Paper Mario.
Add a photo to this gallery
Retrieved from "https://fantendo.fandom.com/wiki/Francis?oldid=3208738"
Community content is available under CC-BY-SA unless otherwise noted.