Foreman Spike is a minor antagonist in the Super Mario series who appears in two of the Wrecking Crew titles and Mobile Golf. In Wrecking Crew, Spike works against Mario during the bonus stages, appearing in the background of the stage to rival them. In its sequel, Wrecking Crew '98, Spike was redesigned with a facial structure resembling Wario's. In this game, he also worked under Bowser.

Outside of cameo appearances, Foreman Spike's final appearance was in the Game Boy golfing title Mobile Golf. In this game, he appeared in his original Wrecking Crew design, but was now made to be overweight, similar to Wario.

Since Mobile Golf, Spike has seldom made cameo appearances. The Japanese Super Smash Bros. DOJO!! website revealed that the brown palette swap of Mario was based off of Foreman Spike, though this was dropped in the fourth instalment. The excavator used by Spike in Mobile Golf reappeared as one of Waluigi's karts in Mario Kart DS, under the name of Gold Mantis. Additionally, the bonus stage theme has since appeared in the Super Smash Bros. series and as Waluigi's theme in Dance Dance Revolution: Mario Mix.

Foreman Spike is set to appear as a supporting character in the upcoming Super Mario film by Illumination Studios, being voiced by American Comedian Sebastian Maniscalco.

Foreman Spike appears as a placeable boss in Super Mario Maker Chi. He attacks by jumping between a background and foreground layer, swinging a hammer to attack the player. He can destroy blocks of a certain hardness if Mario is close by, or swing the hammer down to knock Mario back if he's close to an enemy. He takes 5 fireballs to defeat. His hard hat protects him from Thwomps and Troopouise shells, but can be hit with weapons or spikes. He is distracted by coins and will go out of his way to collect them. There is a placement limit of two Foreman Spikes per subarea.

Foreman Spike appears as a character in Lucky Wars. Foreman Spike uses his hammer to attack, which has large knockback effects on it that can be handy for knocking foes into obstacles on the field or pushing them back from further attacking. Foreman Spike is decently common at a 50% chance rate of appearing.

Foreman Spike WAS a playable character on Super Smash Stadium; however, he was retired. Appearing only in the show's second season, he was a victim of evolving game mechanics and being too slow for his own good. In the video game, he is an Assist Trophy, where he bulldozes over opponents, likely burying them.

Foreman Spike appears as a playable character in Life or Death, his first playable appearance in the series. Spike is notably designed similar to his original Wrecking Crew version, taking cues from the original version as well as elements from the illustration that appear in the 1994 Mario Encyclopedia, as well as some updated designs including cues from his appearance in the Illumination Mario Movie. Much like in the film, Foreman Spike is voiced by Sebastian Maniscalco. 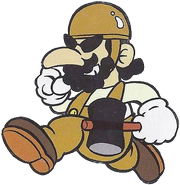 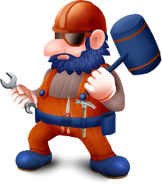 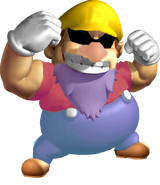 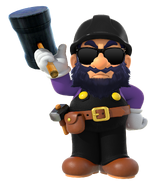 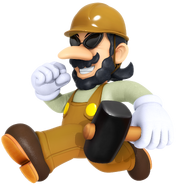 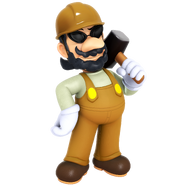