Flynn Rainridge is the main protagonist of Single-Handed Alchemy. After having one of his arms broken beyond repair in an accident, he turned to the practice of alchemy in order to find a way to bring it back to health.

Flynn has medium-length greyish-brown hair and silver-blue eyes. His left arm is permanently wrapped in bandages due to the damage it received. His general attire consists of a blue top that has the left sleeve removed, with an additional zip at the left side to allow him to place the top around his broken arm, along with jeans and a pair of dark blue shoes.

Flynn is a stubborn, apathetic person who dislikes accepting help from others, a trait that carried over from when trying to teach himself how to live a normal life with only one functioning arm. He struggles with socialising due to his lack of empathy, and often fears being mocked for his damaged arm and interest in alchemy. As a result, he generally stays away from people when travelling.

With the select few people who he considers to be “not too bad”, however, Flynn gets along fairly well. He is often happy to hear his friends' stories, although he usually has little interest in them, in order to make himself “seem like a nicer person”. While his stubbornness makes him want to fix his problems by himself, he will eventually turn to a friend for help if he can't manage it alone. This includes asking Rylan to re-bandage his arm, and giving his broken equipment to Penelope for fixing.

As a very young child, Flynn was much more cheerful and had a very adventurous spirit, pushing him to ignore risks in order to enjoy himself. After breaking his arms, however, he became afraid of harm, and grew more cautious and paranoid.

Flynn was born to a typical family in the mountain town of Khemidale. At six years old, a fall from the top of a garden rockery caused both of his arms to be heavily damaged. His right arm healed within a few months, though his left arm showed no sign of recovery. Due to his intolerance to pain, he did not want to have his left arm amputated to make way for a prosthetic arm, and decided to teach himself how to get through life with only one arm.

While he eventually got used to being one-armed, Flynn was still interested in repairing his arm, so he made some research during the summer holidays after junior school. In the end, he found out alchemy, and although body repair through alchemy was an unknown science at the time, he thought that he would try it out all the same.

Moving on to secondary school, Flynn was a target of being mocked by others due to his arm. He often avoided others because of this, prior to befriending Rylan van Herpen and Penelope Goldsworthy, a girl who he vaguely knew from his last year in junior school. The two later introduced him to one of their other friends, Aleah Monet, who soon developed a crush on Flynn. At the age of fourteen, Flynn decided to reveal his interest in alchemy to his three friends. Against his expectations, they didn't judge him for this, and helped him to search for alchemy books to further his research.

Seven years later, at twenty-one, Flynn had gotten a degree in chemistry at university, though his alchemy research was at a standstill due to time used up by studies. Shortly after his graduation, Flynn got his hands on a new alchemy book, which was in a language that nobody in Khemidale could understand. As a result, he decided to set off on a journey to translate the book.

Flynn and Penelope have been friends since secondary school, as Penelope was one of few at the school not to target Flynn for his broken arm. In recent years, Flynn has been Penelope's most frequent customer at her shop, to the point that Penelope has become somewhat dependant on Flynn for her business - a fact that Flynn is blissfully unaware of.

Flynn is very close with Rylan, as they share interests in science and (to extent in Rylan's case) alchemy. The two are often jokingly critical of one another, knowing that a little dark humour wouldn't put a strain on their friendship.

Aleah finds Flynn to be handsome, though Flynn doesn't seem to show any romantic interest in Aleah in return. The two are long-standing friends regardless, however.

Flynn and Jordon are fierce rivals, mostly caused by the two being alchemists from different hometowns, though Jordon's discrimination towards Flynn's disability and rough attitude also forms part of this.

Fanart and Other Unrelated Art

By Exotoro, with an Easter-themed outfit.

With Aleah, for the Fantendo Prom. 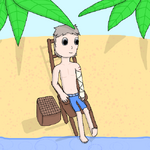 In the sun, for West's summer art prompt.

Mirror originally intended to make a game featuring a winged human as the protagonist, drawing inspiration from Aingeru, the protagonist of the Battle of Bracelets Series. The idea was eventually scrapped, due to Mirror having too many "bird people" in his lineup of characters already.

Flynn being an alchemist was decided halfway through the phase where he was going to be winged. Mirror chose to do this because alchemy was something that he had a strong interest in, though it may have been partly because he was reading the manga series Fullmetal Alchemist at the time.

At one point, Mirror had Flynn unable to use both of his arms, but changed this because he thought it made him too impaired.