Fly Guy appears in Super Mario MHL as a playable character along with Shy Guy.

They return as enemies in Lets-a-go, Mario. They attack like they did in Super Mario 64, spitting fireballs at the heroes. When hit from below, they fall down onto their heads and become vulnerable. Then they are vulnerable to everything, including being run at from the side. They can even be stomped on when they're flying - doing so results in a large Spin Jump similar to the effects of jumping off of a Spindrift. However, they are always too high to stomp on without hacking.

Fly Guys appear as common enemies in this game. There are two types of general Fly Guy behavior: some idly fly around a specific area before spitting fire at the player, a la Super Mario 64. The other type of Fly Guys only appear in rows. If Pokey manages to take out all of the Fly Guys in a row with one segment, he will be awarded a yellow Sphere.

Fly Guy appears as a playable character in Mario Tennis: Heroes Vs Villains. Fly Guy is a tricky playing type having curved topspins but slower hits and ball speeds. Fly Guy’s zone shots are Propeller Dive (Fly Guy dives forward Propeller first forwards or backwards) and Wacky Flying (Fly Guy flies in a two circles left or right). Fly Guy’s Special Shot is Tornado Slam in which Fly Guy spins his Propeller so fast it creates a tornado that pulls the ball down to in front of him. Fly Guy’s hero is Toadette and his Hero Special Shot is Fly Guy Carry where three other Fly Guys fly by, pick up Toadette, and carry her farther back on the court. If Toadette uses her Villian Shot Cancel Fly Guy will point for the other Fly Guys to come but they never do causing the Fly Guy to be embarrassed and the cutscene to end 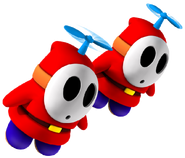 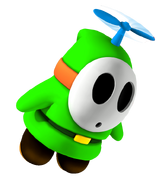 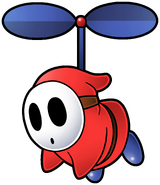 Paper fly guy
Add a photo to this gallery
Retrieved from "https://fantendo.fandom.com/wiki/Fly_Guy?oldid=3263185"
Community content is available under CC-BY-SA unless otherwise noted.