Flutters are metamorphosed, butterfly-like forms of Wigglers, usually serving as enemies to Yoshi. They mostly appear in the Yoshi series, but have also appeared in Mario spinoffs like the Paper Mario and Mario Party series. Not all Flutters are enemies; some help Mario and his friends by flying them to other locations and items.

Flutter makes his debut as a playable character (other than a prior cameo as Wiggler's special move) in Super Mario MHL. He has good chemistry with Wiggler, Yoshi, and the babies.

Flutter makes an appearance in Mario Party 10 as a character the player can call via a Flutter Whistle to take them to the Star. A large one also a as an NPC on Yoshi's Sky Paradise that gives the player a star when they talk to him. 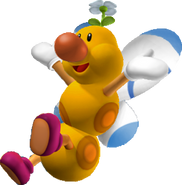 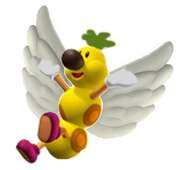 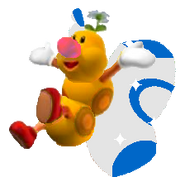 Add a photo to this gallery
Retrieved from "https://fantendo.fandom.com/wiki/Flutter?oldid=3208740"
Community content is available under CC-BY-SA unless otherwise noted.